The Economy and Markets in 2023: The Consensus is Usually Wrong, Could it Be Right This Year?

In trying to discern what will happen in the economy and stock market in 2023, it is easy to simply fall in line with consensus thinking. There are many experts who provide their economic and market outlook this time of the year, and at times it seems like no one is willing to express an unpopular opinion. The result is that most “outlooks” conform to a consensus opinion. There are also some market prognosticators who will take the opposite stand of the consensus because most of the time that consensus ends up being wrong.

For example, this time last year the consensus sentiment among economists, investors, and corporate executives was very favorable toward both economic growth and stock market returns. There were signs that inflation was already peaking, and it was felt that the Federal Reserve only needed to raise rates by 0.75 to 1.00 percent to fend off inflation as supply chain issues got resolved.

The common belief was that while growth would slow in 2022 due to the modest rate hikes by the Federal Reserve, GDP growth would still be solid at around 4 percent, and corporate earnings would continue growing at a near double digit pace. The strong labor market and healthy corporate balance sheets would enable corporate earnings growth to remain strong as the global recovery continued. All of this was viewed as supportive of modest but positive returns in the stock market.

As everyone is painfully aware, 2022 ended up vastly different. Russia’s war in Ukraine exacerbated supply chain issues, and inflation skyrocketed. The US Federal Reserve made it clear they would need to raise interest rates aggressively to bring inflation down. As a result, GDP grew at about half what was anticipated. Stock markets plummeted as investors became concerned about rising interest rates, high inflation and weakening growth. For the full year, the S&P 500 Index of large cap stocks in the US was down 18.2 percent and the All-Country World Index of global stocks was down 18.6 percent on a total return basis.

Toward the end of the year, the consensus view changed as the economic data began to show that inflation was coming down without unemployment moving dramatically higher. Supply chain issues eased as evidenced by falling shipping costs, shorter delivery times, and improved inventory levels among manufacturers. As a result, many market observers began to feel more confident that the Fed may be near a point where they can stop raising rates, and the economy can achieve the “soft landing” the Fed has been aiming for. This change in sentiment caused stock markets to rebound a bit during the fourth quarter of 2022 and has become the basis for the consensus narrative for 2023: A recession is still likely to occur in the first half of 2023, but it will be mild and short. As a result, stocks will probably struggle the first part of the year before staging a rally in the second half of the year. In constructing our view on what will happen in the economy and markets in the coming year, we begin with the understanding that it is impossible to predict what will happen because there are too many variables to consider. Geopolitical, environmental, medical, corporate, and legal events all could impact the economic environment this year.

That said, it is difficult to disagree with the consensus while recognizing that it is dependent on what the Federal Reserve decides to do. The Fed increased rates by 4.25 percent in 2022, which represented the largest amount of tightening within a 12-month window since 1980. Many market participants are betting that the Fed has already overtightened and therefore they will take back the last handful of hikes by the end of 2024. They argue that the inflation data that the Fed is focused on is backward looking and the cumulative impact of the tightening they undertook yet to be fully felt by the economy.

The Fed is still insisting they will continue to raise rates aggressively but given the softening of the inflation data and how much the economic data has weakened, the Fed probably needs to give in and stop raising rates for the consensus view to play out. The data is starting to support such a pivot in thinking.

Material weakness is already apparent in more interest rate sensitive areas of the economy such as housing, and there is reason to believe corporate earnings may have peaked and will drop in 2023. In the United States, both the manufacturing and services sectors contracted in December for the second consecutive month after 29 consecutive months of growth. Source: The Institute for Supply Management Source: The Institute for Supply Management

The Conference Board’s Leading Economic Index has fallen nine consecutive months through November. Labor market, manufacturing, and housing indicators all weakened—reflecting serious headwinds to economic growth. As a result, consumer confidence has been on a downward trend for the past year. The personal savings rate is sliding, and the amount of consumer debt is rising.

*Shaded areas represent periods of recession.Sources: The Conference Board; NBER

Despite the evidence of a slowing economy, the Fed continues to aggressively tighten monetary conditions even as the full effect of the interest rate increases have yet to fully impact the economy. So, it is reasonable to expect the economy to fall into a recession at some point as the rate hikes cause growth to slow further. It also seems likely that the Fed will not have the political will to continue raising rates once a recession starts even if inflation is not down to their target of two percent.

This would set the stage for the second half of the year, when both inflation and unemployment should level off, albeit at higher levels. Corporate profit growth could once again move higher thanks to underlying strength in the services sector of the economy.

The stock market will probably remain very volatile in 2023 as investors continue to drive stock markets up or down based on the most recent economic data releases and comments by Federal Reserve board members. Recently, each time the data showed inflation falling or the labor market cooling, stocks rallied as speculation rose that the Fed would pause raising rates sooner rather than later. Each rally was short-lived, however, because the Fed would strongly restate they will keep raising rates until their inflation target of two percent is obtained.

Right now, surging inflation which inhibits sustainable growth necessitates higher rates. As the data indicating slowing growth becomes more pronounced, investors’ concerns will shift from rising inflation to an oncoming recession. As a result, the stock market could be under pressure during the first half of the year. At that point, the Fed will probably stop raising rates and wait for their prior rate hikes to fully filter through the economy.

This decision will rest on how much pain they are willing to inflict on the economy to stamp out inflation. For example, suppose the economy is in a recession with unemployment above 4 percent, but core inflation is stuck at 3 percent, which is still above the Fed’s target. Would the Fed pause, or would they continue raising rates and make the recession worse, potentially putting more people out of work, to get inflation below their target?

The answer to that question is the key to what will happen in the stock market in 2023. Historically, the stock market does not hit bottom and begin a sustained rally until after a recession begins and the Fed stops raising rates. Once the Fed pauses, stock prices could rise and begin a durable recovery during the second half of the year. But if they continue to raise rates to reach their inflation target, stocks will likely continue to fall, possibly falling below the stock market’s recent lows that were reached in early October. In this scenario, a market recovery would not occur until 2024.

This issue should be resolved over the next few months as inflation drops and the labor market softens. Predicting what the Fed will do is extremely difficult, but it is probable the Fed is talking tough now to prevent speculation from returning to the riskiest stocks and other risky assets. Extremely low interest rates and very slow economic growth were at least partially responsible for the speculative boom of risky assets such as high growth technology stocks, cryptocurrencies, and Special Purpose Acquisition Companies (SPACs). Investors drove these risky assets higher as they sought better returns, and the Fed does not want this to happen again.

But if the Fed pauses its rate hiking campaign once the U.S. economy is in a recession, the second half of 2023 may be a decent period for stocks. Historically the stock market does very well in the twelve months following the last Fed rate hike. During the first half of the year, however, stock prices are likely to fall further. Valuations still are not cheap, and interest rates could stay at a higher level than they have been for many years. With a recession around the corner, higher rates and falling corporate profit growth will probably cause another leg down in stock prices. The good news is we are getting closer to the end of the rate hikes, which will provide more clarity and set the stage for future gains in stock prices. Bond prices should benefit as well. Long term interest rates continue to fall, which would likely continue through the initial stages of a recession. 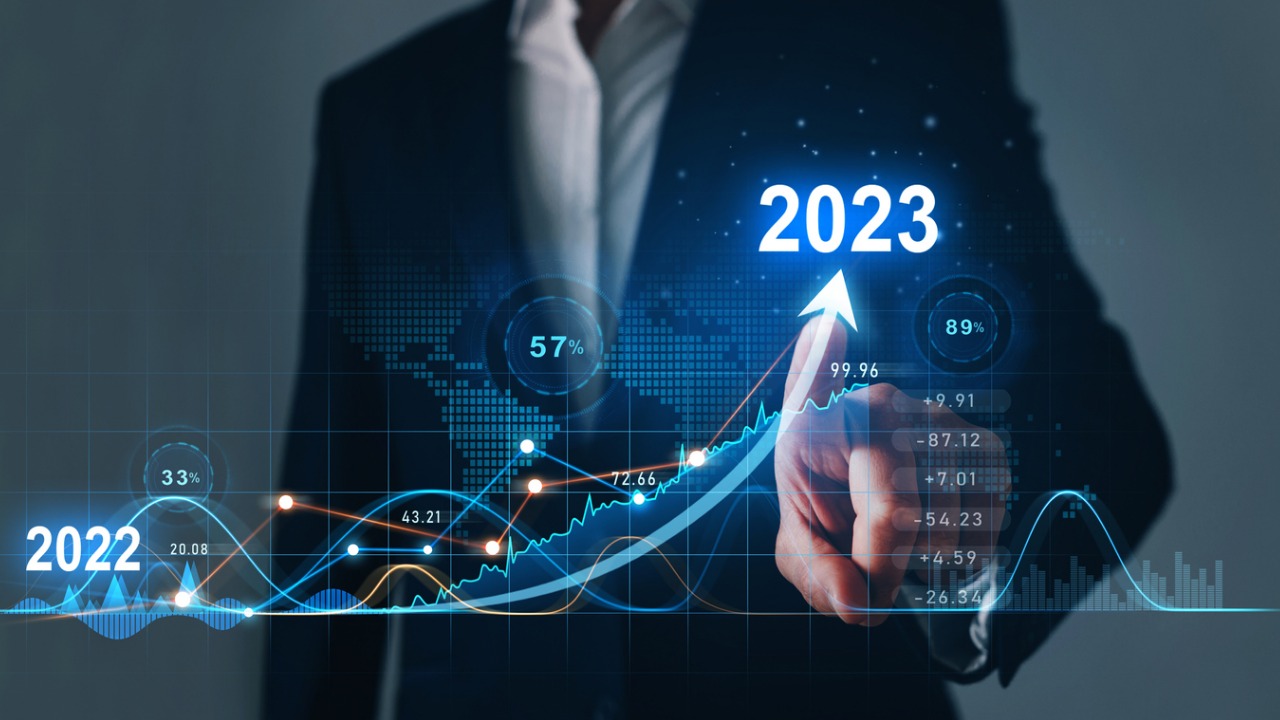