Recessions are a Normal Part of the Business Cycle

After 10 years of substantial expansion, the global economy began to stall in the middle of 2018. Now more than a year later, global growth continues at a slower pace. Available data indicate that world Gross Domestic Product (GDP) grew about 3 percent annualized in the recently completed third quarter of this year, below the 10-year average of 3.5 percent but stronger than the second half of last year when growth dropped to 2.5 percent annualized. The U.S. economy slowed more with GDP growth estimated at less than 2 percent annualized in the third quarter of 2019. 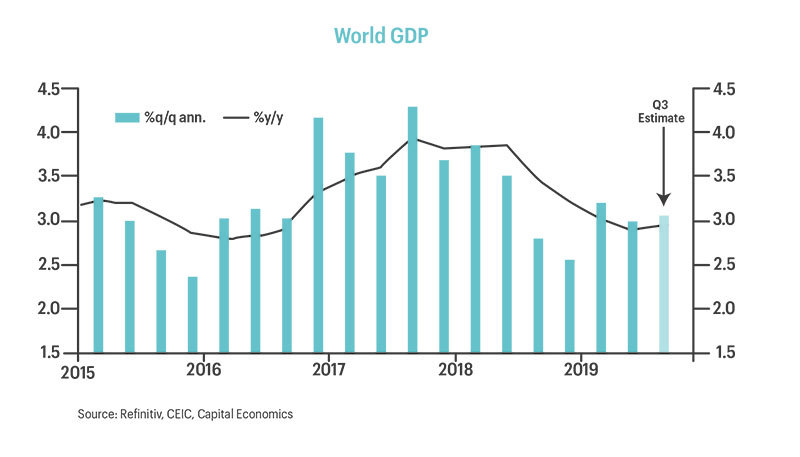 A manufacturing slowdown has been one of the primary reasons for the deceleration in global growth, as the increase in trade tensions between the U.S. and China and policy uncertainty surrounding many economies is causing businesses to cut back on capital expenditures.

As we enter the fourth quarter of 2019, more and more economists are predicting a recession within the next twelve months. In addition to businesses cutting spending, there is evidence that consumers are also rethinking their spending habits. If consumers, who account for nearly 70 percent of GDP growth in the United States, also curtail spending it could push the global economy into a recession.

So far consumers have been resilient because in general, most are in a good financial position. Unemployment remains near record lows, wages are ticking higher, and prices on goods and services remain low. Personal debt has risen but is not exceptionally high, and interest rates are low so payments on the debt remain manageable.

But we live in a world where news is disseminated constantly across many platforms, and the scariest headlines get the most attention. At the same time, there is no shortage of issues in the U.S. and abroad with the potential to derail the ongoing global expansion. To make matters worse, the media tends to dramatize and magnify the probability that any of these events might occur. Eventually, this fear mongering can become detrimental to the psychology of business leaders, consumers and investors. The risk is real that people will react by reducing their spending and investing, bringing about the very recession they worry about.

There are some signs that consumers are beginning to scale back. The Conference Board’s Consumer Confidence Survey and the University of Michigan Sentiment Survey both show that consumers are becoming more likely to delay purchases of large household goods, cars and homes. Spending on automobiles has already suffered. From 2018 to 2019, world vehicle sales will likely fall about 5 percent. In China, auto sales are expected to fall by as much as 15 percent. In addition to trade tensions, new stringent emission requirements, expiring tax breaks, and tighter auto lending standards have all played a role.

Despite all this negative news, global growth may be bottoming and set to improve in 2020. Manufacturing cycles typically last about three years: 18 months of slowing growth followed by 18 months of rising growth. Since global manufacturing peaked in the first half of 2018, it could be nearing the end of its downturn. 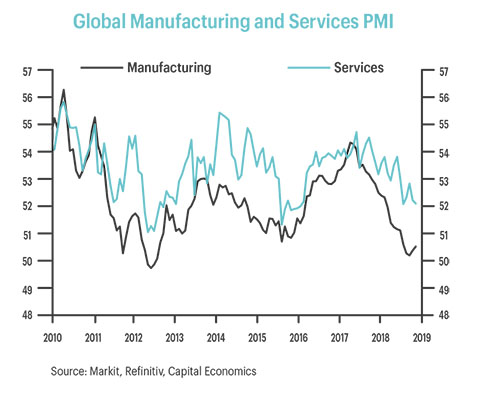 Overall, growth appears to have accelerated in many emerging economies, but there seems to have been a slowdown in the developed world, with the U.S. and the Eurozone both expected to post slightly slower growth than in the second quarter. But even in the developed world, there is cause for optimism because the service sector PMI remains in expansionary territory. This is important because past recessions have been preceded by a fall in service sector activity as well as manufacturing activity.

Also, the issues causing the drop in auto sales may be less of a factor going forward as consumers adjust to the new standards. Interest rates are likely to remain low, which makes purchasing an automobile more affordable.

Finally, most central banks around the world have begun cutting rates, which could provide a boost to growth in 2020. Normally, as an expansion ages, central banks are reluctant to lower interest rates to spur growth because it may cause a spike in inflation. But over the past decade that relationship has broken down. Inflation has remained low despite historically low interest rates around the developed world. This may be because globalization has allowed businesses to keep costs low due to the increase in the portability of labor and production—or because the increased use of computer automation and other technologies is making firms more efficient. More than likely a combination of these factors is resulting in an environment where profits must fall substantially before firms need to raise prices. In any event, looser financial conditions and low inflation usually bode well for global growth.

Current data indicates a recession won’t occur at least for a year or two, but even if it does, it is important to remember that recessions are a normal part of the business cycle. In the U.S., there have been 11 recessions since the end of World War II. The average length of these recessions is 11 months, and the average decline in economic activity (Gross Domestic Product) from peak to trough was only 2.3 percent. The average performance of domestic stocks, as represented by the S&P 500 Index, was up 0.1 percent during the recessions (not including dividends). It is important to note, however, that stocks did drop—a modest 3.2 percent on average—in the six months prior to the onset of a recession. 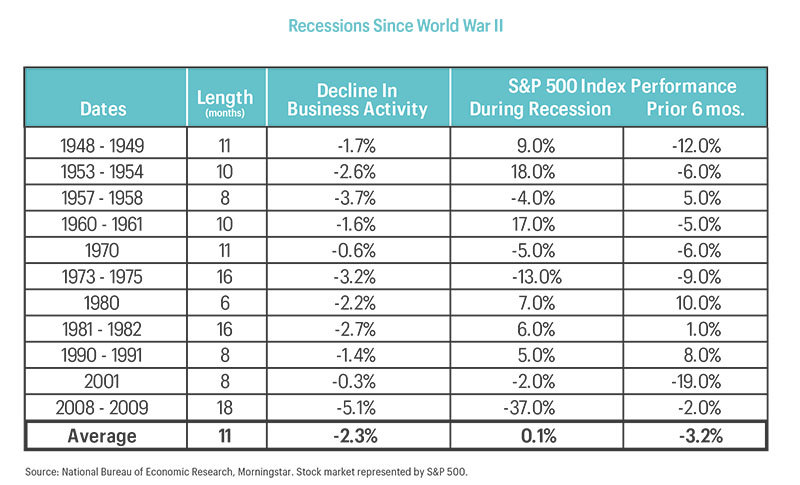 Why, then, are many so fearful about the next recession? Perhaps because the headlines continue to claim that a recession would be catastrophic and lead to a sharp contraction in economic activity and plunging stock prices. That fear is likely based on the memory of what happened in 2008 and 2009 when domestic stock prices dropped 37 percent during the Great Recession (and a total drop of 57 percent before rebounding in the latter stages of that recession. However, a primary cause of that recession was the crisis in the financial sector, and banks are healthier now that they are required to maintain more reserves.  With inflation and interest rates near historical lows, the next recession will probably not be anything like the Great Recession. More likely, a decline in business activity will be closer to the historical average and on the shorter side of the historical range of six to eight months.

The jobless rate in the United States, at 3.5 percent, is the lowest since 1969, but inflation is only 1.4 percent. Wage growth and productivity have picked up, and interest rates remain low. Longer term, the economic environment is still conducive to further gains in global stock markets. Still, with valuations stretched and so much uneasiness surrounding the trade war, impeachment proceedings, Federal Reserve uncertainty, and Brexit, the probability of a short-term correction is high. At the very least, the continued economic uncertainty amid slower growth could lead to more volatile equity markets going forward. In this environment, we believe that companies that can weather the slowdown thanks to solid cash flow and low debt, but also offer growing dividend payments, could lead the market forward. 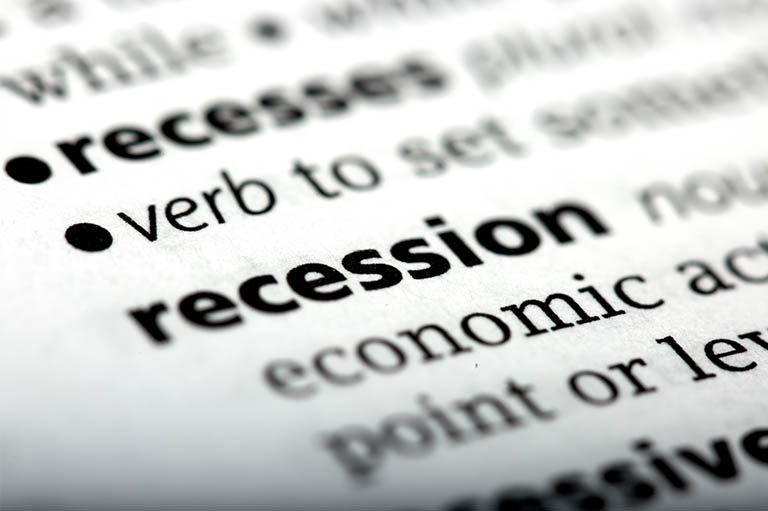