Global economic growth may rebound in the second half of the year, providing a boost to foreign stocks

For most of the first quarter of 2019, many economists were pessimistic about the prospects for global economic growth the rest of the year. Concern was mounting that global growth would continue falling, helping to push the United States into a recession in early 2020, possibly even by the end of the year. In the United States, the Federal Reserve said in March that the U.S. economy was slowing more than it had previously thought, due to the trade war between the U.S. and China, economic slowdowns in Europe and China, and the fading boost from the tax cuts of 2017.

Now, just a few weeks later, the economic outlook has improved substantially. In the United States unemployment is at historically low levels, interest rates remain low, wages are finally rising, and inflation is still contained. These factors should continue to drive consumers’ demand for goods and services, which accounts for nearly two-thirds of Gross Domestic Product (GDP). When the minutes from the U.S. Federal Reserve’s latest meeting were released on April 10th it was revealed the Fed had acknowledged the economy’s improvement. The Fed also announced they would likely refrain from any additional rate hikes the rest of this year, although they kept alive the possibility of resuming the rate-hiking campaign if economic conditions improve substantially the second half of the year. The current economic expansion will likely become the longest in U.S. history in July of this year.

Economic conditions are a bit more tenuous overseas, although there has been improvement recently in many countries. One measure that is watched closely is the Leading Economic Indicators (LEI), which is a compilation of several data points that historically indicate the future direction of the economy. These are tracked both for individual countries as well as the global economy. According to BCA Research, the Global LEI has been falling, but the LEI in many countries have turned upward. In the chart below, the dotted line is the Diffusion Index, a measure of how many countries have rising LEI versus how many countries have falling LEI. The Diffusion Index has been rising for over a year, which means that more and more countries’ LEI have been improving, not worsening. 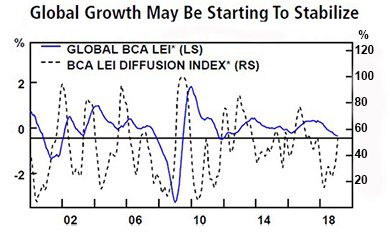 Other measures of global economic activity also show improvement. Global growth in the service industries has improved, and some measures of shipping activity have recently begun to recover. Consumer confidence has rebounded in many countries, and global financial conditions have eased significantly since the start of the year. These improvements have occurred against the backdrop of a reduction in perceived geopolitical risk.

Optimism has risen that the U.S. and China will be able to reach a deal that would keep tariffs at current levels and the trade war will not result in an escalation of imposed tariffs. Many experts believe that China has begun to accept the current tariffs as the cost of doing business with the United States and is more agreeable to a deal. Already, there have been reports that China acknowledged that their practice of Intellectual Property theft is an issue that can be discussed in negotiations.

In the United Kingdom, where investors have been worrying about the financial implications if the UK leaves the European Union without an agreement (a “hard Brexit”), there is now optimism. The European Union recently extended the exit deadline until the end of October. Some experts believe a Brexit deal was never attainable, and now the delay makes it more uncertain whether Brexit will ever occur.

As the anxiety investors had at the beginning of this year regarding slowing global growth, the Fed rate hikes in the U.S., ongoing trade talks, and Brexit deliberations have subsided, investors’ appetite for risk has risen. The result has been a surprisingly quick rebound in stock prices since the market bottomed on December 24th of 2018.

The rebound in stock prices may continue, but there are many landmines along the way. If global growth expectations fall any further, recession fears could return. On the other hand, if growth accelerates back to 2018 levels, the Fed could resume its rate-hiking campaign. Geopolitical issues could also return, such as a rekindling of global trade tensions or a “hard Brexit” on November first. If any one of these things occur it may cause another round of selling in equity markets, which suggests equity markets could be highly volatile as we move through the rest of the year.

This is one reason why HBKS® Wealth Advisors advocates the careful balancing of risk and reward in our clients’ investment portfolios. An important part of that process is the inclusion of foreign investments. Bespoke Research estimates the United States accounts for about 40% of the world’s stock market capitalization, and only about 24 percent of global Gross Domestic Product (GDP). In other words, about 60 percent of the world’s stock market value and 76 percent of global GDP comes from outside the United States.

Still, U.S. investors have tended to shy away from the stocks of foreign companies. This makes sense given that the performance of stocks in foreign developed and emerging markets have been uninspiring in recent years, and they have exhibited higher volatility than large cap stock markets in the United States.

Despite this, HBKS continues to believe foreign equities are a crucial component of a fully diversified portfolio. As the chart shows below, stock market leadership runs in cycles. The current cycle of US leadership is almost 8 years long, which leads us to wonder how much longer this can last. 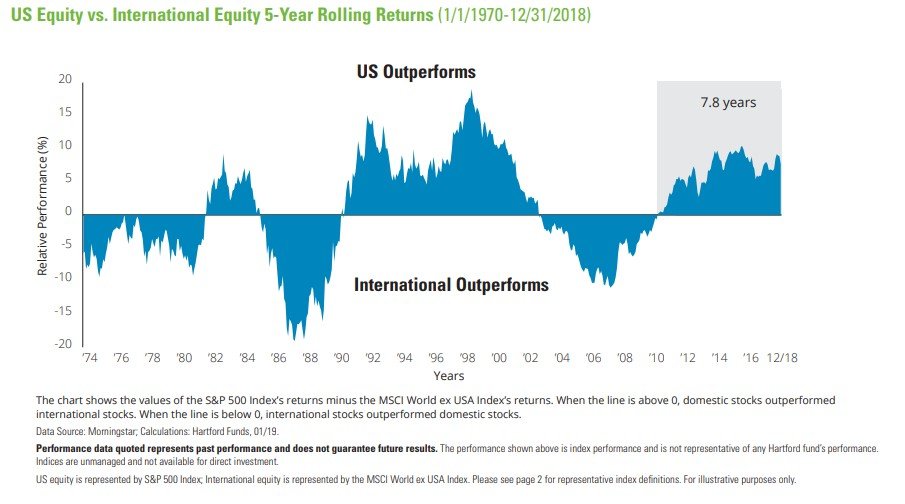 Meanwhile, stocks in the United States are much more expensive than foreign stocks. The chart from the Leuthold Group below shows the valuation disparity between foreign and U.S. stocks is near record levels. 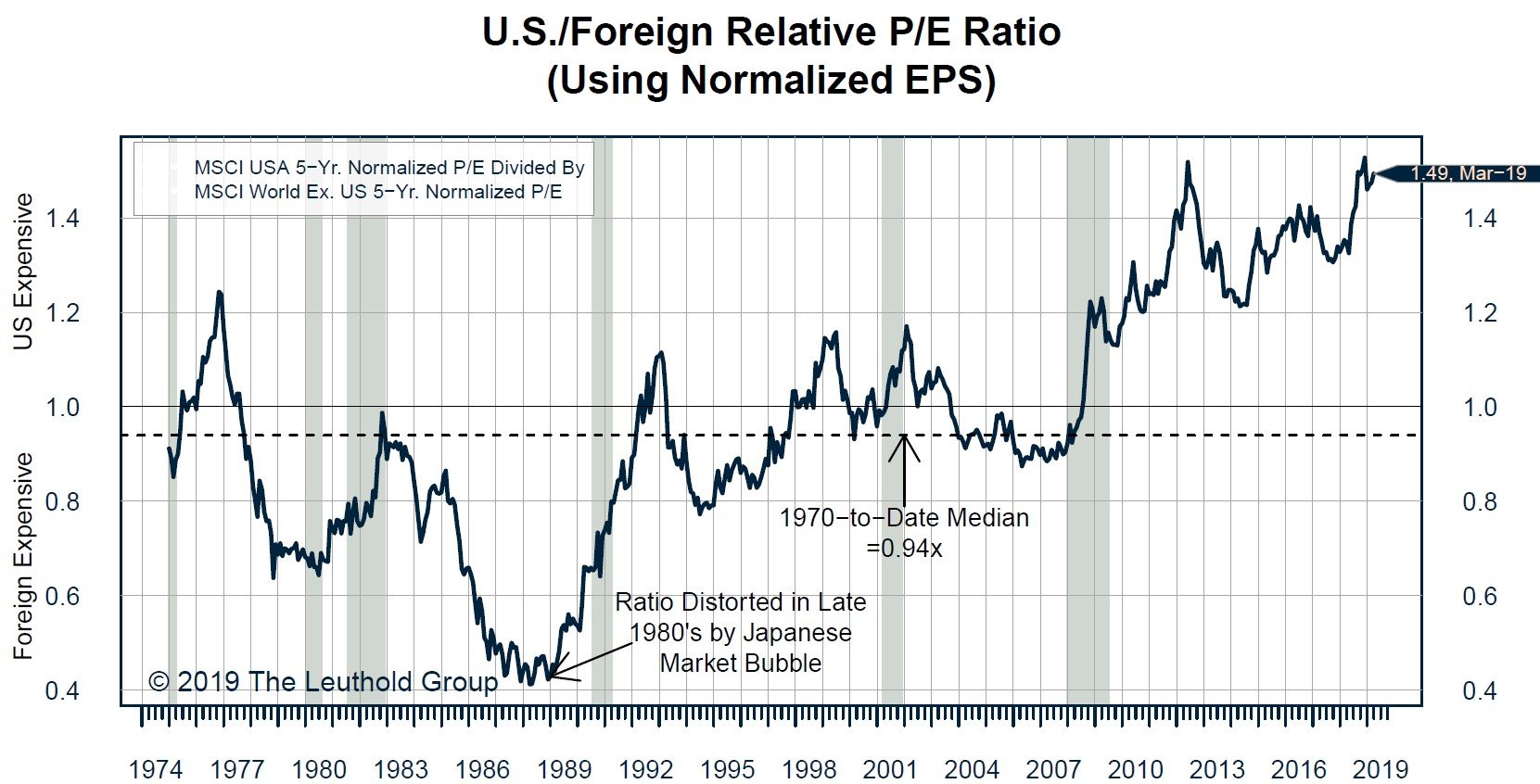 As we move through the rest of 2019, current expectations for economic growth in many foreign countries have been lowered substantially, to the point that even the most pessimistic outlook is probably reflected in the price of those stock markets. Even so, global economic growth is still expected to be 3.3 percent in 2019, higher than the anticipated growth in the United States of around 2.0 percent. Any positive surprises in the data could provide the impetus for a stronger rebound in foreign stock prices relative to stocks in the U.S.

Stronger growth amid lowered expectations alongside much cheaper valuations may provide the impetus for foreign equities to begin the next cycle of outperformance versus domestic equities. While investing in foreign stocks may feel a bit bumpier, investors with international exposure may be rewarded with solid returns relative to domestic equities over the long run.

This article is intended for general informational and educational purposes only. It does not contain any individual investment advice, and cannot be relied on as provideding investment. Advice. Investment Advisory Services offered through HBK Sorce Advisory LLC, d.b.a. HBKS Wealth Advisors. Not FDIC Insured – Not Bank Guaranteed – May Lose Value, Including Loss of Principal – Not Insured By Any State or Federal Agency. 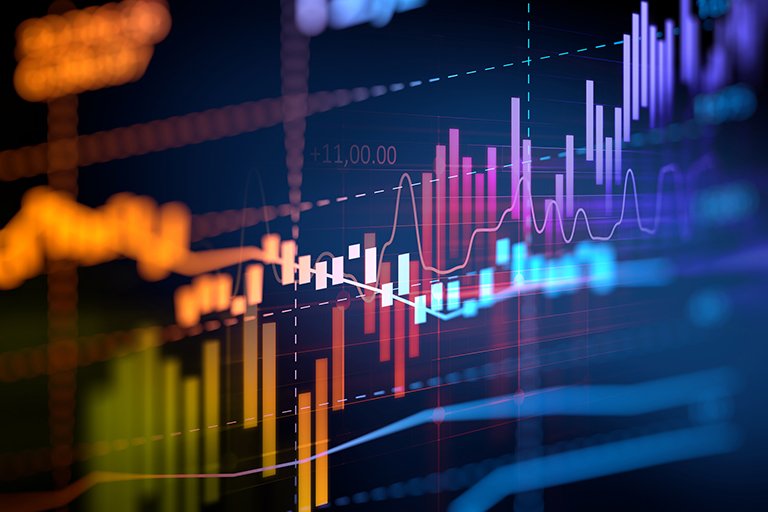