A webinar highlighting the advantages of selling your business to your employees.

On March 23, HBKS Wealth Advisors followed up its February 24 webinar with additional insights on the advantages to employers and employees of an employee stock ownership plan (ESOP).

Zugell. An ESOP is a qualified retirement plan that has a single investment, the stock of the sponsoring company. It is designed to give owners a chance to sell their company and employees the chance to participate in the ownership of the company where they work. The ESOP borrows money, which it uses to buy the stock, then uses the tax savings generated by the ESOP to pay off the debt. Owners typically receive their money over a 20- to 40-year period. And when a participating employee terminates their employment with the company, they cash out their stock.

Zugell. The tax advantages of ESOPs depend on whether you are structured as a C or S corporation. From a broad perspective, there are two major benefits: For a C corporation it is much like a real estate exchange: if you sell a property and buy a similar property, you don’t have to recognize a tax gain. If you hold a C corporation for five years, sell it and convert the money to stocks and bonds, you don’t have to pay taxes.

An S corporation structure is behind most ESOPs currently. Most companies will be 100 percent owned by the ESOP, so the profits are no longer taxable—not just deferred but never taxed again because ESOPs are tax-exempt entities and distributions don’t have to leave the company. With no distributions, the increased cash flows go to the company, and what used to be paid in taxes goes to pay off the debt.

DiGirolamo. Typically proceeds go to owners who are responsible for paying taxes. But the S corporation is owned by the ESOP. The income gets paid to the ESOP, which is not subject to income tax.

Zugell. Once the debt is paid off, the ESOP can use the earnings to grow the company—to buy competing businesses, to develop and introduce new products, to give raises. There are no capital gains taxes and profits are never again taxed. It might sound unbelievable. But governments like those uses of funds because employees are building wealth where they work, and the more independent wealth they have the less dependent they are on government safety nets. Plus, companies grow, hire new people, build buildings, and save other businesses by buying them. Studies show that over an eight-year period, governments earn more tax revenue from the economic activity generated by ESOPs than if they had collected the tax on profits. They are actually increasing some of the tax benefits to make it less important to choose between C and S corporation status.

Carrier-Goncz. Valuation plays a key role in the sale and ongoing. When an owner is looking to sell their stock to an ESOP, you have to determine a price. Value is determined similar to a sale to an outside party. For an ESOP, the owner hires an appraiser to consult on valuation for the purpose of the sale and the ESOP, represented by an independent plan trustee, also hires an appraiser. They opine on the fair market value in accordance with the standards set by the Department of Labor. It looks similar to doing a deal with an investment banker. Following the appraisals, negotiations center around returns, risk, and appropriate market multiples, and the two parties land on a price and terms.

There are expenses involved in retaining the professional advisors to help determine the value of the business: financial advisor, trustee, and legal fees. Once formed, you have to value the business annually for compliance purposes and the fees for annual evaluation typically run around $10,000 to $20,000.

Of course, sellers want to maximize their value. The fundamental ways to influence value relate to return and risk. Return has to do with maximizing profits of the business through revenue, pricing products to generate the highest revenues, and penetrating markets. It includes efficiently managing expenses. Cash flow also has an impact on value, so focus on making sure you are collecting receivables quickly and turning inventory efficiently. Obsolete fixed assets can drain cash flow and depress value.

Buyers will assess the risk of returns being sustained after the sale. Businesses with recurring revenue models are less risky; project-oriented businesses are riskier. Businesses with sustainable competitive advantages are also less risky than those with commoditized products. Strong management teams where the business is less dependent on the current owners add value.

An ESOP wants to grow value on a continuing basis. The ESOP trustees want to get the employees behind growing the business and seeing the share price increase annually. The areas of focus for growth are similar to maximizing the value of a business: improved profits, more growth opportunities, reducing risk with less risky business lines.

Some of that is the natural evolution of ESOP. As it pays down its debt on the money it borrowed to buy the company, the share price should increase. In an S corporation, where taxes are being retained by the business and debt is down, cash flow improves and the business can pursue mergers or acquisitions, introduce new products, and in general expand its market.

Two things are unique to ESOP valuations: One is the level of scrutiny by the Department of Labor on determining an appropriate fair market value, which requires appraisers to be experienced in ESOP valuation and able to meet the criteria for determining fair market value. A second relates to the repurchase obligation. The shares in the ESOP are subject to being repurchased as plan participants retire. The appraiser has to determine the amount of the future obligation based on the demographics of the participants and how that obligation will be met.

Zugell. In terms of bank support, an ESOP will typically have the cash flow to finance 100 percent of the transaction. The problem is that a bank won’t lend 100 percent. They will lend maybe 1.5 to 2.5 EBITA. A seller can finance the rest, perhaps getting only interest until the bank is paid off, then principal and interest. An owner will accept that to get the transaction done and knowing that the company will have the cash flow to pay it. But we can reward the sellers for bearing interest-only subordinate debt: get a high rate of return, like 9 or 10 percent, or pay a percentage of the value of the company after the debt is paid off, at the higher current value.

Carrier-Goncz. Banks like ESOPs because of tax advantages. They won’t lend 100 percent of the sale price, but the structure is not a disadvantage in obtaining credit.

You need a team of advisors: legal and accounting professionals; a financial planner and wealth advisor helping the seller with the investment of the proceeds and to qualify for any tax advantages with the deferral of capital gains; an ESOP quarterback who analyzes the transaction, makes sure it’s feasible. On the ESOP side, you need a trustee team: an appraiser, a plan administrator, and an ESOP lawyer. You have to be sure you have the right advice going into the deal.

Taylor. To transfer the proceeds to a qualified replacement you have to consider the investments as a long-term replacement. If you buy investments you intend to hold for the next 40 to 50 years, your heirs will get a step-up basis and gains will never have to be paid. There are concerns about tax law changes, like an increase in capital gains taxes and that the step-up basis could go away. But there are always risks with tax laws. So it may make sense to pay capital gains upfront and not be at risk. Also, you have to invest the proceeds from the sale within 12 months. You have to have trusted advisors with specialized knowledge to make sure you‘re using the proper investments and taking into consideration your personal planning.

Zugell. When employees leave they get to cash out their invested balance. The company has to buy back its shares. We do a 20-year liability study to ensure they can meet that liability. We can use tax savings to squirrel money away. If somebody retires you treat them better than if somebody quits. We structure the plan that way.

Taylor. For the first 10 years, there’s not usually a lot of money needed to repurchase shares, so you can pay with cash flow. In the next ten years, there will be more people retiring and getting paid based on a higher company value. You may have a lot of buyback in a short period of time and can’t predict available cash flow. We plan to fund that in a couple of ways to make it more palatable. For one, we can invest in cash value life insurance policies on the higher income employees who will be getting a greater number of shares each year. You’re building cash value in the policy to fund later cash-outs, but also to cover the unfortunate case of a premature death. Another way is through typical investment programs. Life insurance and investment programs are both tax advantageous because they are a part of the ESOP assets.

DiGirolamo. The new administration and the cost of dealing with the pandemic both indicate higher income taxes. But a retroactive change typically doesn’t happen. If we see a new law, it would likely apply prospectively. If you are thinking of selling you might consider that rates might go up in 2022 or later.

Zugell. We’ve been getting a lot of calls looking to enjoy the current low capital gains tax. Business values went up with TCJA. With rising tax rates, business values will drop. Nine months is not a lot of time to package your company and take it to market and close by the end of the year, but it’s plenty of time to get an ESOP done. 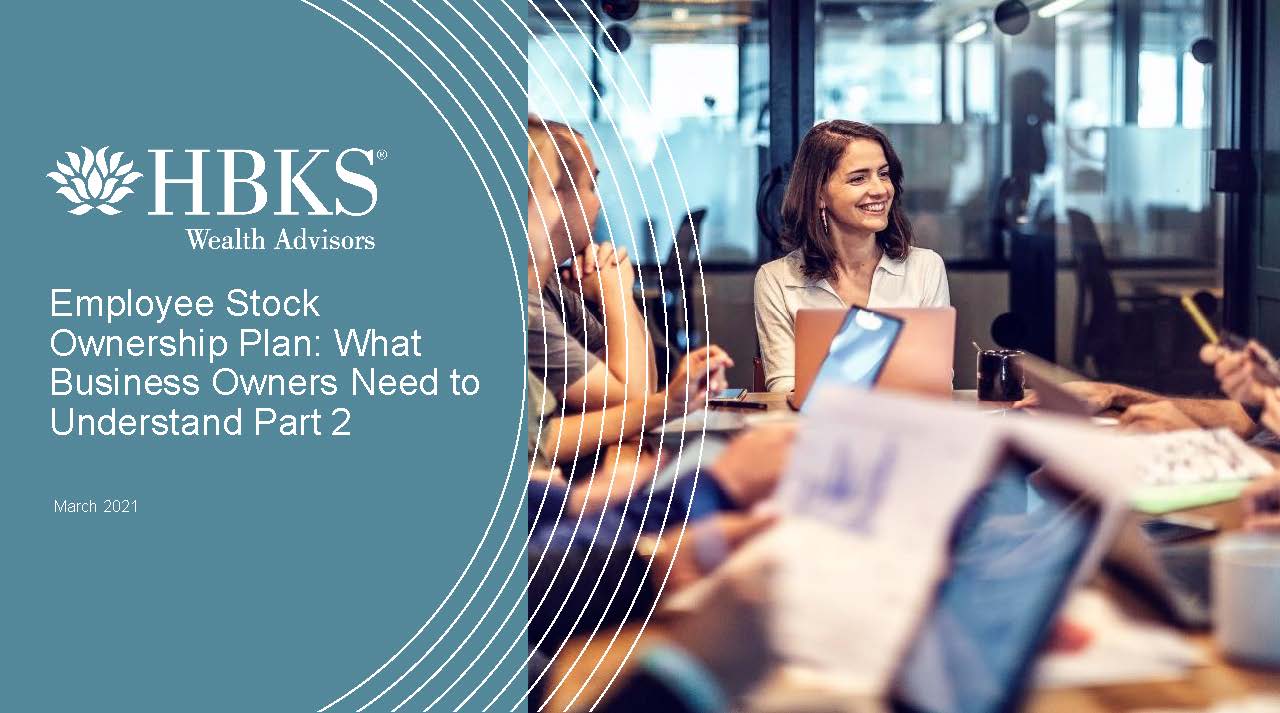