Last year will be remembered as one of the most traumatic years in history. It was a year of many changes, and while some things may return to the way they were before 2020, other events may bring about permanent changes. The events of 2020 are probably etched painfully in everyone’s mind, but a quick review may provide some insight into how fast the economy can return to a more normal trend in growth in 2021.

The year began with the emergence of a deadly coronavirus in Wuhan, China. Within a few months, the COVID-19 virus caused a global pandemic, and many governments responded by shuttering business activity for a large part of the year. As a result, global Gross Domestic Product (GDP) posted its largest quarterly drop in history during the second quarter of 2020, precipitating a global economic recession. Global stock markets, as measured by the MSCI All Country World Index, responded by falling almost 34% from late February into early March.

While the pandemic raged, a wave of demonstrations and protests around the world was sparked by the police-involved killings of George Floyd and Breonna Taylor. On the political scene, US President Donald Trump faced an impeachment trial in January before he was ultimately acquitted. Contentious elections went on for much of the year and culminated in Democrat Joe Biden being elected President in November and control of both the Senate and the House of Representatives eventually going to the Democratic Party as well.

To put how dramatic 2020 was from an historical perspective, the year can be seen as a combination of the events of 1918 (the Spanish flu pandemic), 1968 (Civil Rights demonstrations and protests), 1998 (Bill Clinton impeached), and 2008 (the financial crisis). Despite the turmoil, global stocks posted an amazing recovery, rallying off the lows in March to finish the year up more than 14%.

As the world moves forward the pandemic still rages, many service industry businesses are barely staying afloat, racial harmony is far from attained, and politics in the United States remains extremely antagonistic. While the world may be able to regain some sense of normalcy this year, the events of last year have the potential to create dramatic changes that will influence the world for many years. They will also provide some of the dominant themes that will impact the economy and stock markets in 2021.

The Economy
Global economic activity had been recovering the second half of last year as many lockdowns were lifted or at least eased. However, the recovery took a hit in the fourth quarter as the third wave of COVID-19 infections caused a renewal of business restrictions in parts of many countries. In the United States, Fourth Quarter Gross Domestic Product stalled but likely will remain slightly positive.

Despite the new shutdowns, the global Leading Economic Indicators (LEI) are still signaling that the recovery in economic activity will resume and strengthen throughout 2021. 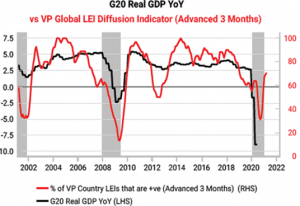 In many places around the world manufacturing activity is improving and trade is growing. The massive stimulus still being provided by central banks around the world should continue to prop up activity until the vaccination of the general public occurs and service companies can resume normal business activity. Still, the world may not return to the trend in growth seen before last year until 2022 or even 2023.

In the United States, data across manufacturing, consumer spending, and housing remain strong, trade is rebounding, and corporations have begun to move money out of savings accounts and into demand accounts. This is an early indication that corporations are ratcheting up their spending plans for 2021.

The Democratic sweep of the office of the President, the House of Representatives, and the Senate could lead to higher corporate taxes and tougher regulations on businesses. However, it also raises the probability of additional fiscal stimulus which could provide an additional short-term boost to the economic recovery.

The vaccination of the public beginning sometime in the second quarter of 2021 will be crucial in enabling the global economic recovery to strengthen. Only when the public attains something close to herd immunity will governments be able to remove business restrictions and consumers will be able to resume going to restaurants, bars, theaters, and hotels. Even so, there will be many changes in the way business is conducted. Online shopping, working from home more often, and less business travel are likely trends that will remain permanent. Businesses that most quickly adapt to these new realities will fare the best going forward.

Overseas, the economies of most foreign developed markets are rebounding, with the manufacturing and housing sectors performing strongly in most places. However, there is a wide divergence in the timing of the recoveries in economic activity for various regions. Much of the Eurozone went into lockdown at the end of last year, so the recovery in this region will be a bit slower than the rest of the world. In the United Kingdom, there are many uncertainties surrounding the exit from the European Union, or Brexit, which will likely make for a rough recovery. In Japan, fiscal policy support and a more limited response to shutting down businesses during the pandemic could allow corporate earnings to surge compared to the rest of the world.

The outlook for the emerging economies is more positive. The recovery in global growth could push inflation higher, benefitting the commodity-producing countries in the emerging markets. China’s growth could moderate but remain robust given it emerged from the COVID-19 pandemic before the rest of the world.

A major factor that could boost global growth is the Regional Comprehensive Economic Partnership (RCEP) that was recently signed by the leaders from 15 Asia-Pacific nations. The RCEP is one of the biggest trade deals in history and brings Asia a step closer to becoming a coherent trading zone like the EU. It seeks to reduce barriers in an area covering a third of the world’s population and economic output. It could result in cheaper goods for the world, and allow US companies to further diversify their supply chains out of China.

The Capital Markets
Global stock markets have surged higher in anticipation that the vaccinations of the public will occur in the second quarter of 2021. Any delay could cause a short-term correction to occur, but longer term the reopening of businesses should allow equities to continue rising and finish 2021 higher than when the year began. Corporate earnings are likely to accelerate, especially in those sectors that are highly sensitive to improving global growth such as Industrials and Financials. 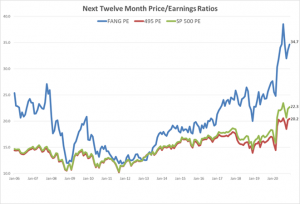 While these stocks have surged, the price of many other stocks that are highly sensitive to global growth barely budged. The stocks of companies that are more economically sensitive tend to be labeled as “value” stocks. Value stocks have been underperforming “growth” stocks for the past twelve years. 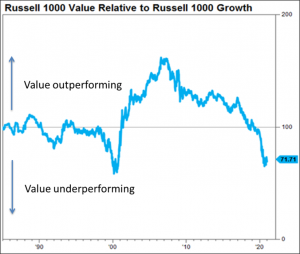 Last year growth stocks outperformed value stocks by the largest amount ever, over 30 percent. These trends tend to move in ten-year cycles, reverting to more normal historical averages after very large divergences. This reversal may already be occurring. Since the announcement of the first effective vaccination against COVID-19 was announced on November 9th of last year, the more economically sensitive stocks have led the market higher.

Democratic control of the Federal Government could enable this trend to continue because the companies that could be hurt the most from higher taxes and higher interest rates are large-cap growth stocks. Technology stocks could be hit the hardest as investors rotate away from growth stocks and into value stocks.

Similarly, Emerging Market equities are near their biggest relative lows versus the U.S. market in the last 50 years, have inexpensive valuations, the strongest growth prospects, and are under-owned by most investors. The declining value of the dollar also benefits emerging markets because it enables capital to flow out of the US and into smaller countries. Emerging Market stocks, along with value stocks and small cap stocks, also typically lead the market higher when the world’s economies are exiting a recession. As a result, these stocks could provide the largest upside potential in 2021. 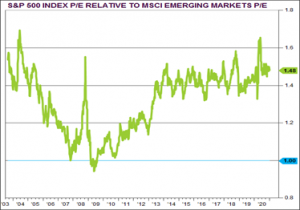 Outside the stock market, the Federal Reserve has indicated they will maintain low interest rates for the foreseeable future, which will put a lid on rates. Still, bond yields are likely to rise modestly over the next year as the global industrial cycle swings up, economic growth strengthens and inflation expectations are raised. Rising inflation could also boost commodity prices. In particular, real estate prices have dropped dramatically to the point where vulture funds are buying opportunistically. Any return to normalcy should see prices shoot up, although probably not to their prior peak. The long-term outlook on Crude Oil is murky due to the green movement, but near term it could do well as supply conditions have become very tight. Industrial commodities may also do well, particularly copper due to increasing demand from battery production related to green energy.

The vaccination rollout should enable the global economy and capital markets to return to somewhat normal patterns over the next three years. Still, some parts of our daily lives have likely changed forever. Online shopping, working from home more often, and less business travel are likely trends that will remain permanent. It remains to be seen how this will impact economic growth, but the world’s economies have adapted to many changes throughout history, and these changes are not likely to be any different. One of the biggest concerns, however, is that the massive stimulus being provided by central banks around the world may cause inflation to surge once the excesses and distortions are corrected. But the stimulus was necessary to prevent a much more severe shock to the global economy, so that is an issue to be dealt with sometime after the next few years. 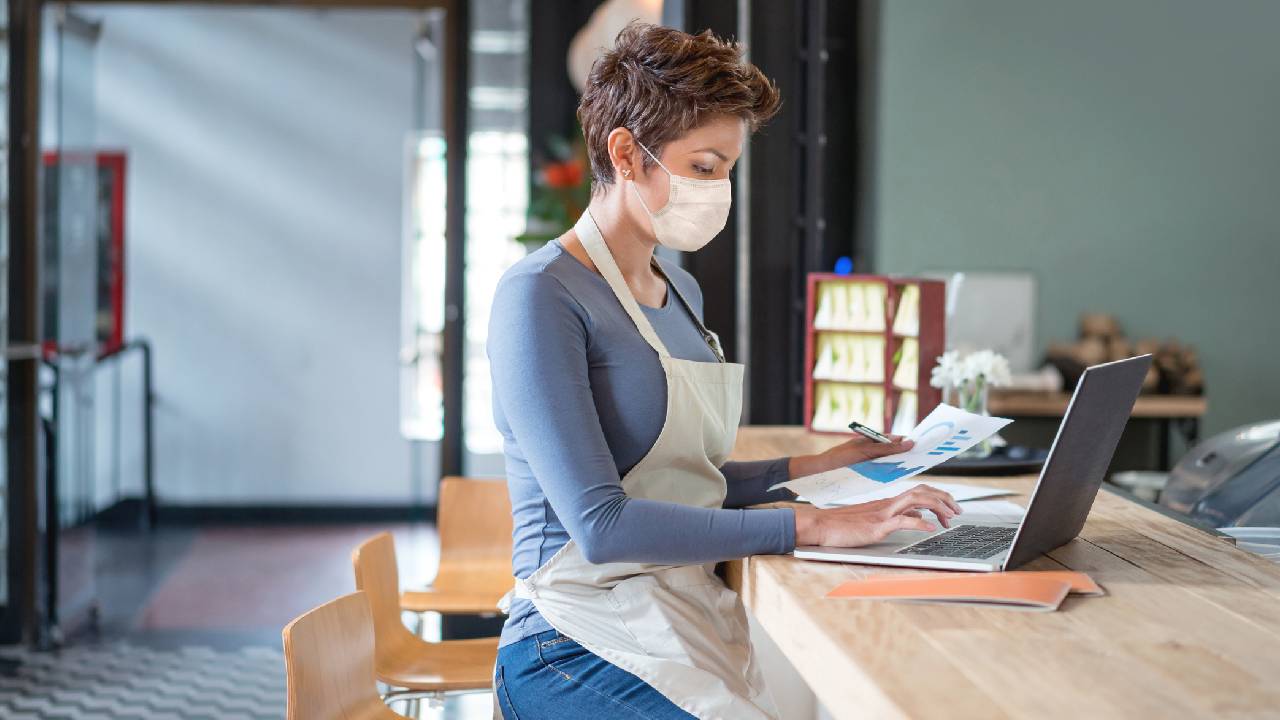