During the third quarter the S&P 500 Index rallied sharply, reaching new highs before giving back some of the gains in September. This year stocks have rebounded from the depths of the lockdown-induced sell-off in March, thanks in large part to the massive monetary and fiscal stimulus provided by most governments around the world. Some estimates peg the total amount of global stimulus to be more than $20 Trillion, with a big portion focused on maintaining consumer income levels near where they were before the lockdowns. This has kept consumer demand healthy and enabled corporate earnings and the housing market to rebound faster than expected. As a result, hiring in the United States has picked up for four consecutive months.

There were also some positive developments surrounding coronavirus treatments and rapid testing during the quarter. Despite a resurgence of cases in some countries, mortality rates in most places are well below their spring levels. Four vaccine candidates are in late-stage trials in the United States, and health officials are optimistic a vaccine may be ready for broad distribution as early as the end of the first quarter of 2021.

Year-to-date, the S&P 500 Index was up 5.57 percent through September 30th, which is remarkable considering economic activity is sharply lower today compared to where we started the year due to the global recession that resulted from the COVID-19 pandemic. In the United States this year, Gross Domestic Product (GDP) fell an annualized 5.0 percent in the first quarter and another 31.4 percent in the second quarter. While GDP is expected to snap back in the third and fourth quarters, it will likely remain below its previous trend until the end of 2022.

The dichotomy between the rising stock market and the underlying economic conditions has caused some market strategists to remark that there is a disconnect between the two. However, this view ignores the fact that the entire performance of the S&P 500 has been generated by a small handful of technology and internet-related stocks, while the vast majority of the stocks in the index have struggled to eke out any gains. For example, this year through September 30th, five stocks that account for 22 percent of the S&P 500 Index (Apple, Facebook, Amazon, Microsoft, and Alphabet) were up a combined 40.4 percent. The other 495 stocks, which account for the remaining 78 percent of the index, were down 4.0 percent.

So, there is not as big of a dichotomy between the vast majority of the stock market and the economy as the overall performance of the index might suggest. However, what about the performance of the handful of technology and internet-related stocks that have risen the most? Their outperformance versus the rest of the market has persisted for the past five years but accelerated greatly this year. 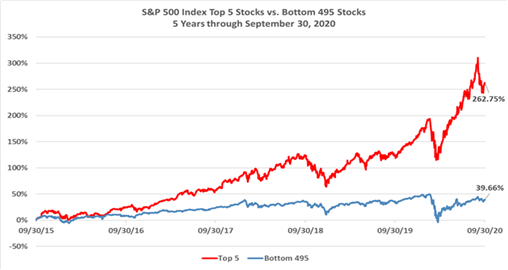 Several secular trends that were underway were accelerated in 2020 by the pandemic-induced shutdowns. This year both consumers and businesses have had to rethink how they operate. For consumers, online shopping and virtual discussions with friends have become more commonplace. Corporations are changing the way they do business, including investing in technology across their entire supply chain to be more efficient, investing in video conferencing to better facilitate remote working and meetings, and transitioning to online advertising. Schools are also investing in technology to facilitate remote learning.

The stocks that are the most leveraged to these trends have surged this year, while the stocks that are more leveraged to growth in economic activity have fallen. But in September there appeared to be a reversal of stock market leadership. Concerns about the valuations and future growth of those same big technology companies that accounted for all of the market’s performance in 2020 finally came to the forefront. Those stocks now trade at very expensive valuations and are under heavy scrutiny at the Federal government level in both the United States and Europe. There also appears to be a higher probability of an increase in taxes and a tighter regulatory environment for these companies in the future.

The result was that stocks gave back some of their gains, but those stocks that are more reasonably valued and have been hit the hardest during the lockdown held up better than the large-cap growth stocks that have benefitted from the acceleration of trends during the pandemic. As the global economy continues to reopen, this trend should continue.

Another factor in the September slump in equities has been Congress’ inability to pass another coronavirus relief bill which had been so widely expected early in the quarter. As a result, many economists have cut GDP forecasts for the fourth quarter of 2020. At the same time, several high-frequency indicators of activity began to suggest the economic recovery may be slowing. Unemployment claims, while still well below the worst levels in the early stage of the lockdown, have leveled off and are no longer dropping. This news, combined with layoff announcements by several high-profile companies, triggered fears that some of the job losses may be permanent given the structural damage caused by the pandemic.

Concerns about the strength of the economic recovery were also magnified by the fear of renewed lockdowns caused by an increase in COVID-19 infections in many states in the US, as well as in some of Europe.

While all this was happening, there was a general sense of uneasiness regarding the upcoming elections in November. Many people worried that the Presidential election results would be so close that there would not be a clear winner until well after November 3rd. With the spike in mail-in ballots that could delay the results, there was a high probability that the election may not be decided for months. When President Trump refused to say he would commit to a peaceful transfer of power if it is determined he lost a very close election, fears of a crisis centering around the mail-in ballots brought back memories of the “hanging chads” that caused so much confusion and delayed the results of the Presidential election in 2000. Toward the end of September, however, this fear subsided as the polling gap between the two candidates widened.

As we look beyond the election, a lot has been written about which Presidential candidate, if elected, would provide the strongest boost to the economy and stock market. Recently there has been a shifting of popular opinion. Earlier this year, the consensus was that President Trump’s combination of lower taxes, a looser regulatory environment, focus on bringing manufacturing jobs to the United States from China, and spending on infrastructure would be the most conducive to economic growth and stock market gains.

However, as the third quarter progressed, the consensus shifted in favor of Joe Biden. The prevailing sentiment became Biden’s policies would deliver a bigger boost to growth. Biden’s plan would provide a more expansive stimulus package, no tax increase on those making under $400,000, a corporate tax rate that is raised from 21 percent to 28 percent (which is not as high as it was before President Trump lowered it from 35 percent), higher wages by raising the minimum wage, and reduced tariffs on China.

In the end, any difference in economic growth will likely only be marginal under either candidate. Joe Biden’s lower tariffs and more infrastructure spending would likely be offset by corporate tax increases and tighter regulations versus a continuation of President Trump’s policies. In any event, this analysis does not take into consideration several other important factors. One additional factor would be who controls Congress.

However, studies have shown that the most important factors in economic growth and stock market returns during a President’s tenure are the point in the business cycle a president takes office and if the Federal Reserve is raising rates. Historically, returns tend to be low for Presidents who took office in the latter stages of the business cycle. Typically, this is when economic growth is slowing and the Federal Reserve is tightening.

This year, whoever is elected will inherit an economy that is recovering from a recession and the Federal Reserve is on record saying it will not raise rates for an extended period. While global growth faces near-term challenges from a resurgence in the pandemic and the failure of the US Congress to pass a stimulus deal, growth should revive next year as a vaccine becomes available and fiscal policy turns stimulative, regardless of who is elected. So, while there may be some short term volatility surrounding the election, longer term stocks should trend higher.

While the stock market is likely to move higher over the next year, the shift in leadership that began in September also may continue. In September, the stocks of companies that are more leveraged to the reopening of the economy, generate cash flow consistently, have solid balance sheets, and whose shares trade at a reasonable multiple of their book value outpaced the fast-growing technology companies that had been powering the market higher. Investors began to look forward to the reopening of the global economy early next year when it is likely a COVID-19 vaccine will be widely available.

While this trend could continue, any changes to our clients’ portfolios are made within the framework of a broadly diversified, long-term strategic allocation. It is never wise to try and time entry into and exit out of the markets. This is true even during an election. Historically, trying to make market timing decisions based on an election has proven to never add value. It is always best to develop a long-term plan and stick with it. Remember, the key to success is your time in the stock market, not timing the stock market. 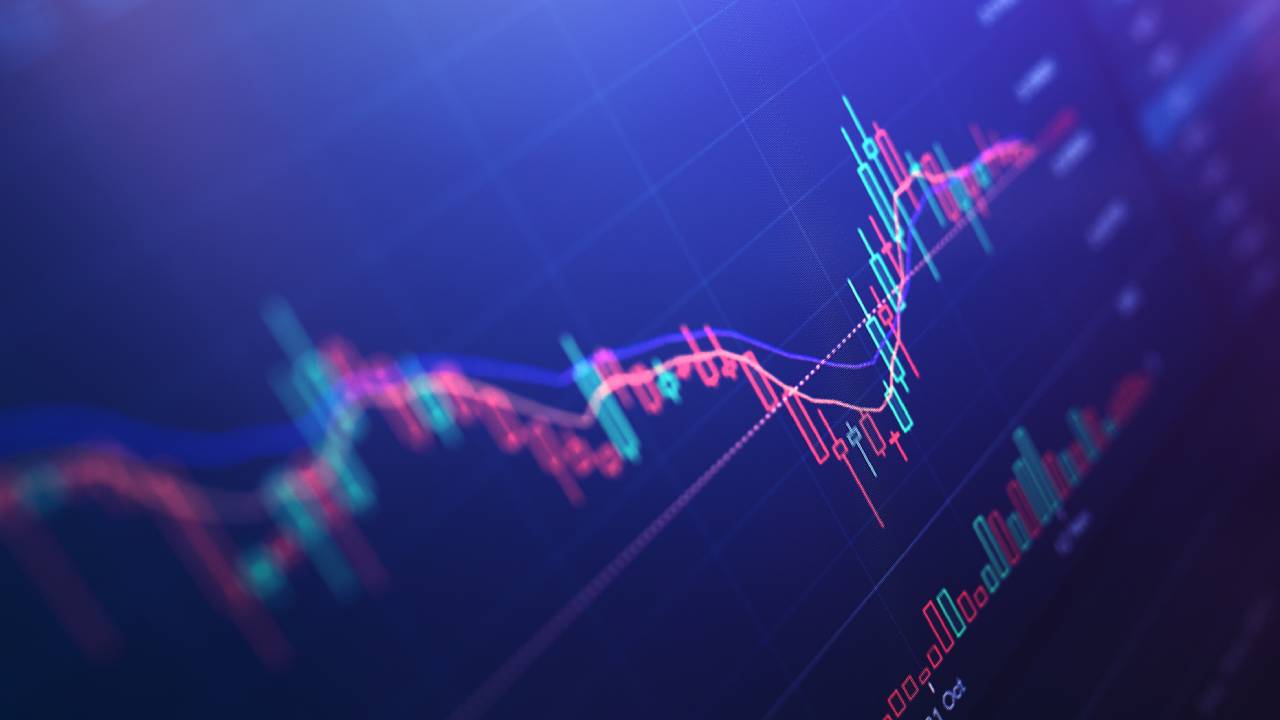