In early April, it seemed likely that the shutdowns caused by the COVID-19 pandemic would lead to a severe but short U.S. recession. More than three months later we are in the midst of a recession, but we are still cautiously optimistic it will be short-lived. Still, there remains a great deal of uncertainty regarding how fast the global economy can recover, as the recent uptick in cases in some states threatens to bring business activity to a halt once again.

The Economy
Economic activity rebounded faster than most economists expected after the reopening of businesses began in May and continued in June. New home sales were strong, 7.5 million new jobs were added, food and travel businesses slowly opened, retail sales bounced back much stronger than expected, theater ticket sales rebounded, and airline traffic improved (see the charts at the bottom of this article). 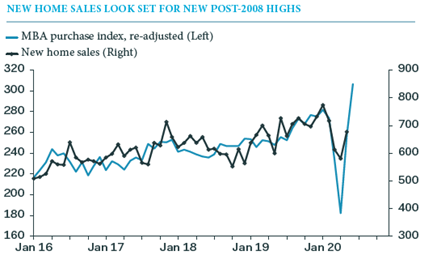 The pickup in activity came despite lingering issues. Racial tensions surfaced in street protests throughout the nation after the killing of a black man by a white Minneapolis city policeman. At the same time, friction between the U.S. and China ratcheted higher. Finally, trillions of dollars of stimulus were needed to cushion the initial blow from the pandemic, raising the debt level of many governments around the world to alarming levels.

Toward the end of June, renewed COVID-19 outbreaks in some parts of the world added to the list of concerns, causing economists to lower their expectations for growth in the months ahead. In the U.S., recent surges in COVID-19 cases halted phased reopenings in more than 17 states and several major cities. The improvements in business activity slowed, as increased consumer caution took a toll.

As we move into the second half of the year, it remains to be seen if economic activity will strengthen or if consumers and businesses will once again retrench. While there is potential for a second wave of infections to lead to another shutdown of business activity, there are reasons to be optimistic. Governments are better equipped to deal with COVID-19 now than they were in February and March. Healthcare officials know more about how the virus is transmitted. Also, more and better treatments are available to reduce symptoms and prevent the virus from becoming more acute in infected individuals. As a result, the probability of intensive care units becoming overwhelmed is much lower now than it was in March.

Because of these factors, a second nationwide surge in COVID-19 infections would likely result in targeted shutdowns in areas with outbreaks as opposed to statewide shutdowns. Businesses in most of the country should be able to continue operating, albeit at reduced capacity to promote social distancing among employees as well as customers. The result may be that the pace of the economic recovery will be slower and more uneven going forward until a vaccine is available; the economy will likely stage only a partial recovery for the rest of this year.

Longer term, the big unknown is what the post-COVID-19 economy will look like, whether people and businesses will change their behavior indefinitely. Will people travel, eat out and go out for entertainment less often? Will they continue to work from home and shop online instead of leaving the house for these activities? Will businesses rethink their supply chains in order to avoid at-risk countries? And will companies do business closer to home, accelerating the decline in global trade?

If history is a guide, the changes in behavior that will become permanent are the trends that were already underway and are being accelerated by COVID-19. People may continue to increase the amount of shopping they do online and continue to use streaming services for home entertainment. Companies may continue to increase their use of technology in the workplace and allow many workers to shift permanently to work-from-home arrangements. Businesses are also likely to continue revamping their supply chains to make them simpler, smaller and more localized. All these trends should boost economic growth because they tend to improve profitability, productivity and efficiency.

Alternatively, changes in behavior not happening prior to a major economic shock have historically proven temporary. An example is the terror attacks on September 11, 2001, which caused a dramatic short-term plunge in air traffic. Air traffic fully recovered within a few years, despite increased security that permanently made flying more time consuming and cumbersome.

The COVID-19 shutdowns have done the most damage to the entertainment, restaurant, travel and leisure industries. While other industries should recover quickly once the pandemic is over, it might take years for these industries. Once a vaccine is discovered, rules that require restaurants, theaters, bars and office buildings to operate at 50 percent capacity will be overturned, and business should return to normal. But it remains to be seen if there will be permanent changes to these industries that hinder a complete recovery, such as long lines of people waiting to have their temperatures taken before entering a building. Even so, like air travel, people will get used to the inconveniences.

Stock Markets
During the second quarter of 2020 global stock markets posted surprisingly strong results. In the U.S., the S&P 500 Index shot up 20.5 percent, and by June 30 was down only about 3 percent from the end of 2019. That is impressive considering the Index was down over 30 percent from the beginning of the year through March 23.

The rise in stock prices took place despite the worst unemployment since the Great Recession, the biggest drop in manufacturing since the global financial crisis in 2008, plunging leading economic indicators and a severe drop in corporate earnings. Recently the economic data has improved, but many market experts are concerned that the rebound in stock prices has been too fast considering almost all economic indicators remain well below where they were prior to the pandemic.

Nevertheless, it is important to recognize that investors don’t invest in the economy; they invest in the future cash flows of corporations. While these cash flows will be impacted by the pandemic-induced shutdowns, some industries will be back to normal soon after the pandemic is over. For those industries that will take longer to recover, there are important distinctions between the economy and stock market indices.

Companies in the hospitality, travel and entertainment industries have less of an impact on the S&P 500 Index than the broad economy. While they comprise 20 percent of the U.S. Gross Domestic Product, they make up only 10 percent of the market capitalization of the S&P 500. Also, many of the largest companies listed on the stock markets, like Walmart, Home Depot and Amazon, remained open during the shutdown.

This also helps explain the potential for stocks to rise in the second half of the year. Market index increases have been driven by a handful of very large stocks that have done well despite the pandemic. However, while the S&P 500 declined only 3 percent in the first half of the year, the average S&P 500 stock was down almost 20 percent. The large companies driving the rise in the S&P 500 are also the most overvalued, and there are many stocks in the Index that have room to improve as the economy recovers.

According to Factset, the top ten S&P 500 stocks now account for 29 percent of the market capitalization of the Index, and the average price-to-earnings (P/E) ratio of those ten stocks is 36.2 times earnings. The remaining 490 stocks have a P/E ratio of 21.2. That’s not cheap, but it isn’t excessive considering the current extremely low interest rates. Many of these are technology stocks, including stocks of companies that provide tools and resources to the largest, most excessively valued companies but are trading at more reasonable valuations.

There are two ways low interest rates provide a boost to stock prices. First, future cash flows get discounted to the present. The lower rates are, the lower the company’s cost of capital, and the more valuable those cash flows are today. Second, a low interest rate environment means bond yields are also low, which makes stocks more attractive than bonds to investors.

It is also important to note that stock investors are forward-looking in their analysis. While current conditions are meaningful, what is more important is what the environment may be six, 12, even 36 months from now. Investors believe the massive stimulus injected into the global economy by the U.S. and other countries in the developed world will keep the economy afloat until the pandemic subsides.

Throughout history there have always been reasons not to invest. Rarely has there been a time when people “felt good” about investing in what they have perceived as risky assets. In the U.S., investors have dealt with recessions, depressions, pandemics, social unrest, world wars, assassinations and a near-meltdown of the financial system. There have been many periods of short-term sell-offs and volatility. But despite these disruptions, stocks have trended higher over longer time periods.

Of course, there are risks associated with investing. Policymakers could overreact to a resurgence of the virus and shutdown businesses again, which could lead to a longer recession and more uncertainty. More companies would be pushed into insolvency and the recent gains in employment would vanish. Even with a vaccine, people might permanently change their behavior to avoid crowded restaurants, theaters and arenas. Such a significant structural change in the economy would have a negative impact on long-term growth.

Stock prices are likely to be volatile and trend sideways for a while. Gains may be choppy and hard to come by. But we believe long-term investors will be rewarded for staying in the stock market. We also recommend hedging the risk in owning equities with a long-term allocation to fixed income and other investments that provide returns not highly correlated to the stock market.

In addition, even though U.S. stocks may continue to outperform foreign stocks as a whole, we believe a properly diversified portfolio requires at least a 25-to-30 percent allocation to foreign stocks. There are several reasons to believe foreign stocks will add value in the long term. The pandemic began overseas a month or more earlier than in the U.S. and economic recovery there may also happen sooner. Already we have seen both manufacturing and services activity strongly rebound this month in most developed economies, and unemployment in many places, especially in Europe, did not escalate as much as in the U.S. Foreign stocks also generally have a lower valuation, stronger growth potential and a higher dividend yield as a whole than U.S. stocks. 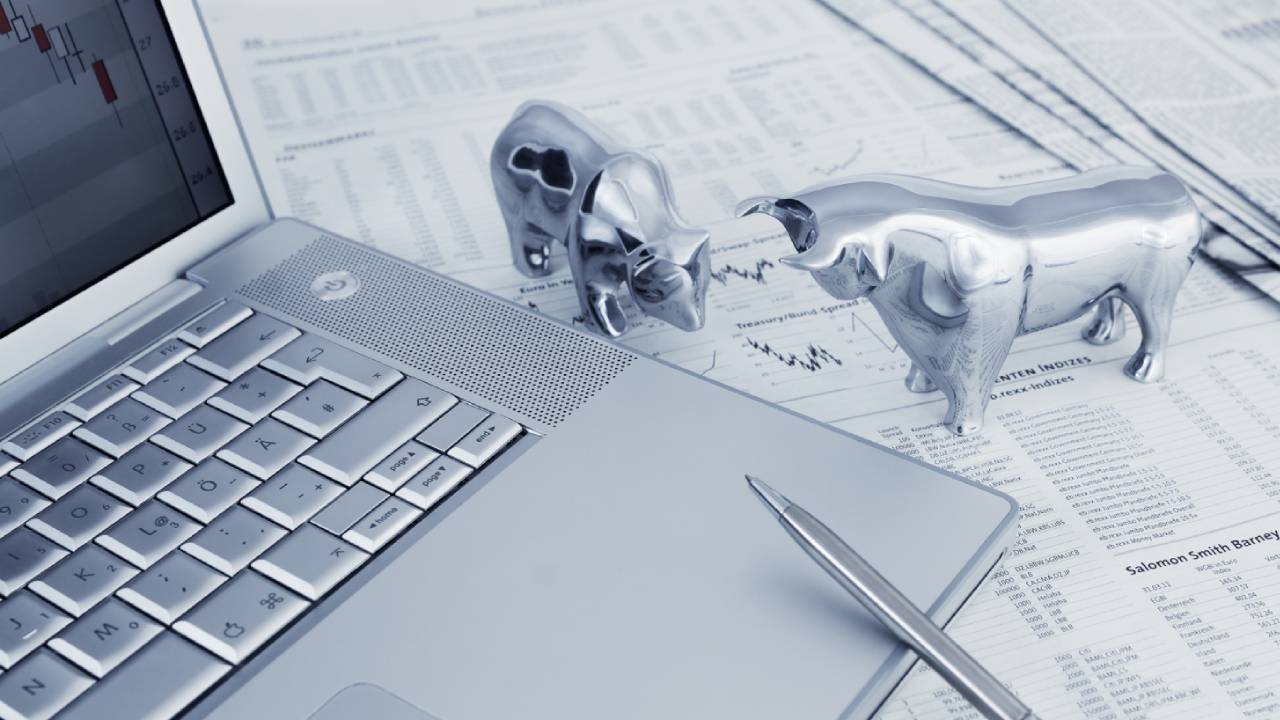