Global stocks continued to climb during the fourth quarter of 2019 to cap a solid year in most parts of the world. The MSCI All Country World Index, an index that covers approximately 85 percent of the global investable equity market, rose 26.6 percent for the full year. The performance of stocks in the United States once again outpaced most other markets, with the S&P 500 Index up 31.5 percent in 2019, its best annual performance since 2013.

More than half of the world’s central banks responded to a slump in global manufacturing by cutting interest rates in 2019. The global rally in stocks during the second half of last year was largely based on improved economic growth in 2020. Manufacturing data began to recover in the third quarter of 2019, and since it usually takes between six to nine months for central banks rate cuts to take effect, manufacturing growth should continue to improve in 2020. 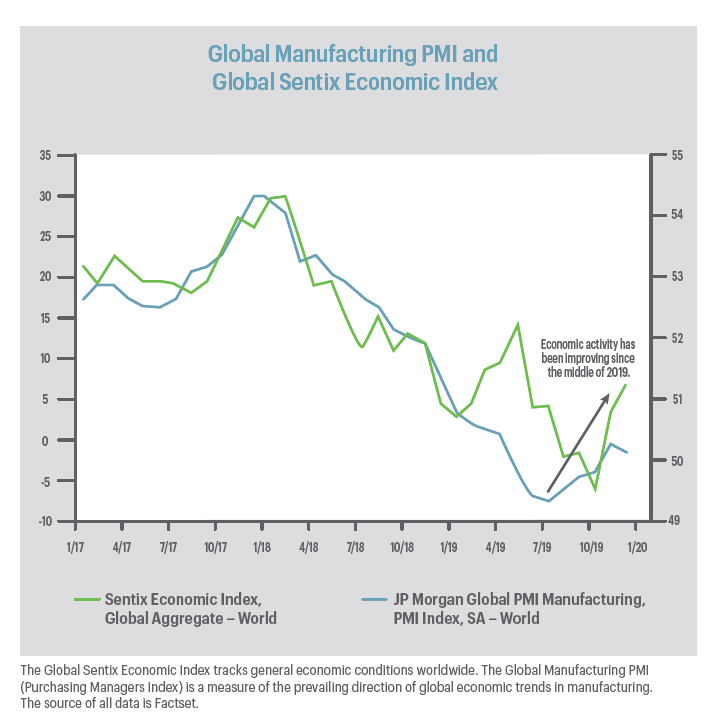 In the United States, after the Federal Reserve raised the target on the Fed Funds rate four times in 2018, the sharp stock market pullback toward the end of 2018 caused the Fed to reassess the health of the economy. With the leading indicators showing economic growth was slowing, the Fed quickly reversed course and cut rates three times in 2019. The rate cuts helped to steady economic conditions, and the concerns that a recession was imminent turned to confidence that the recession warnings were premature.

Economic Outlook For 2020
The economic data supports the optimistic view. Unemployment is at multi-decade lows, wages appear to be rising at every income level, and consumer debt remains manageable. Housing in the United States is showing signs of strength, with homebuilder confidence at twenty-year highs and housing permits at twelve-year highs. All this good news is keeping consumer confidence high, so consumer spending should continue to be strong. The U.S. economy is likely to continue growing at a steady but unspectacular rate of around 2 percent in 2019. However, there are several unresolved issues that are causing a great amount of concern for the economic outlook in 2020.

Trade talks between the U.S. and China
Investors expect that China and the United States will sign a phase one trade deal, trade tensions will deescalate, and a phase two deal will be signed in short order. While this is all possible, genuine results from the talks between the two countries have been difficult to achieve. Recently it appears that progress has been made, but even if a phase one deal is signed, hammering out a credible phase two deal that includes a means of enforcement may be problematic. The continuation of an uncertain trading environment may continue to cause businesses to delay spending on long term investments.

Tension in the Middle East
Geopolitical risks to economic growth were largely pushed to the background last year. That changed the first week of the New Year when President Trump ordered the killing of prominent Iranian General Qassem Soleimani. Soleimani was the general who led Iran’s elite Quds Force. The Quds Force is a unit of Iran’s Islamic Revolutionary Guard Corps (IRGC) specializing in unconventional warfare, which has been actively attacking what they perceive as anti-Muslim groups, including Americans, in dozens of countries.

The move by the United States marks an escalation in the series of retaliatory attacks between the U.S. and Iran since Iran-backed forces bombed a military compound in Iraq on December 27th, killing a U.S. Defense Contractor. Iranian Supreme Leader Ali Khameini vowed ‘harsh retaliation’ against the U.S. and then retaliated on January 8th by firing twenty-two missiles at two military bases in Iraq where American troops are stationed. There were no reported casualties, and Iran’s foreign minister said it “concluded proportionate measures” and does not seek escalation or war.

For the moment rational heads seem to have prevailed, but the events serve as a reminder that there are numerous geopolitical risks in the Middle East, Russia, Europe, and North Korea that could short circuit the global economic recovery.

Divisiveness in America
Corporate earnings growth was essentially flat in 2019, but the results were better than feared. The expectation for 2020 is for corporate earnings growth to rebound somewhere between 5 and 10 percent. Since consumers appear poised to continue spending and the manufacturing data is beginning to improve, that seems to be achievable.

But Americans will be more divided than ever with 2020 being an election year and the continuation of the impeachment of President Trump. Some members of Congress are also challenging the Trump administration’s authority to launch airstrikes against Iran without first notifying Congress. The divisiveness could dampen consumers’ confidence and cause them to cut back on spending.

Federal Reserve Uncertainty
Jerome Powell, the Chairman of the U.S. Federal Reserve, has indicated the Fed will refrain from making any changes to interest rates in 2020. But the Fed has always noted that these decisions are data-dependent, and if the data either improves or deteriorates dramatically the Fed could be forced off the sidelines. If investors are caught off guard by a Fed move either up or down, the sense that the Fed is panicking may lead to a sell-off in risk assets.

European Fragmentation
The risks have substantially diminished of a no-deal Brexit and further European fragmentation due to the rise of Nationalism in Europe. But uncertainty remains high in the near-term as Brexit faces a Jan. 31 deadline and populist governments in places like Italy continue to clash with the European Union.

How all of these issues play out may determine if economic growth will continue to strengthen in the United States and around the world in 2020.

Stock Market Outlook For 2020
The global stock market surge during the second half of last year was largely based on all of these issues being resolved favorably, and it is possible that in 2020 something won’t work out as well as expected. Stock market prices, especially in the United States, could be vulnerable if there is a disappointment.

Corporate earnings growth is one of the most important factors driving movements in stock prices. Over the past five years, there has been a very high correlation between the corporate earnings growth of S&P 500 companies and their stock prices. Valuation levels of stocks during the rally of the past ten years have remained at reasonable levels because corporate earnings were also growing strongly. However, that changed in 2019 as the S&P 500’s sharp gains came as investors looked past practically zero corporate profit growth, anticipating a rebound in 2020. However, when equity markets climb to record levels at the same time profits are stagnating, valuations can become excessive. 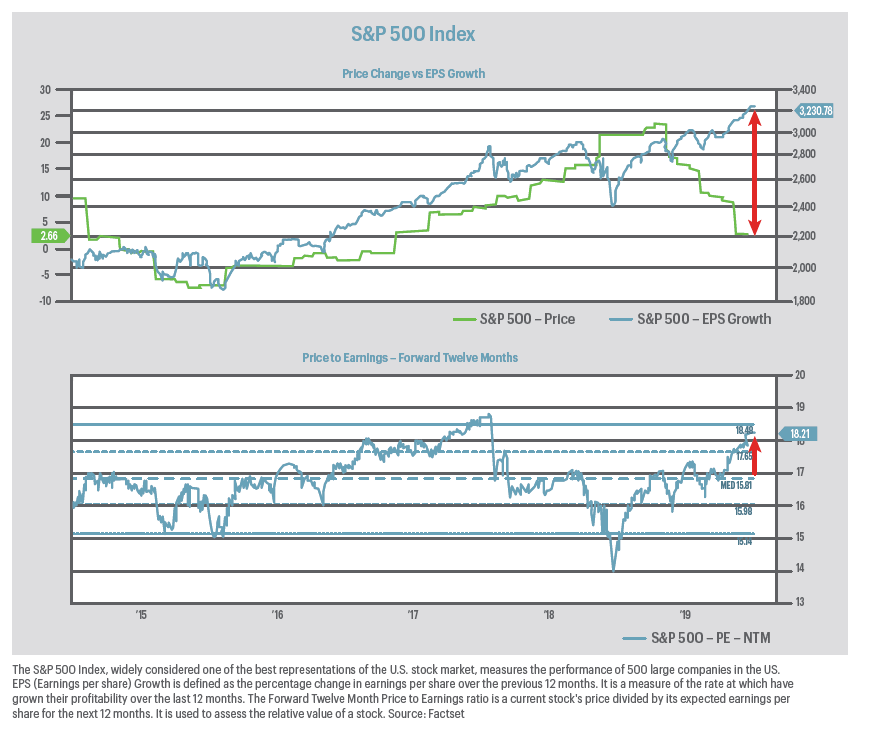 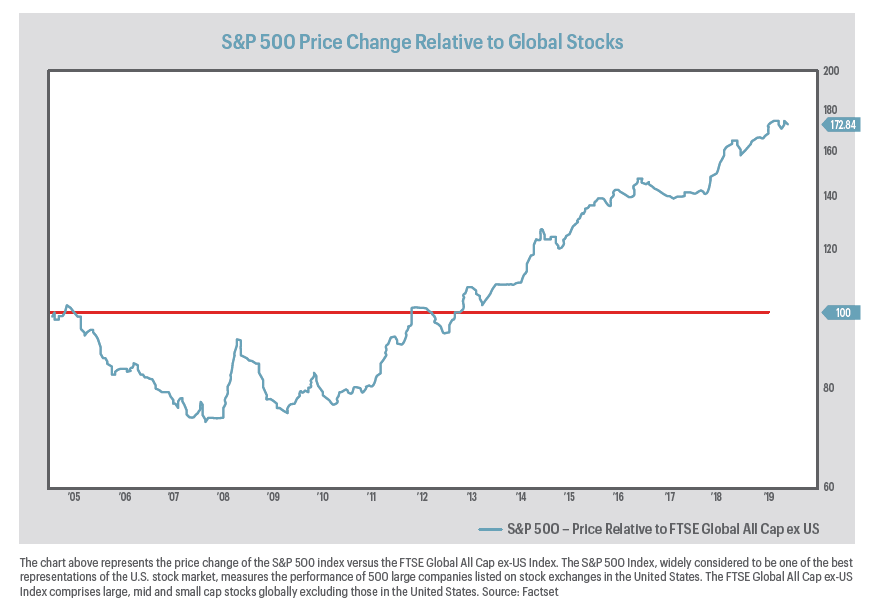 The relative valuations and growth prospects for foreign stocks versus stocks in the U.S. seem to indicate a leadership change is near. At the end of 2019, U.S. stocks are more expensive relative to their foreign peers than they have ever been. The forward Price to Earnings ratio (P/E) for the S&P 500 Index is 18.2, well above the forward P/E of 13.6 for non-U.S. equities. However, global economic growth is expected to be 3.5 percent in 2020, well above the 2.0 percent expected in the United States. This disparity could be an indication that equity markets in the U.S. have risen too high.

Even if corporate earnings growth rebounds to eight or nine percent in 2020 as expected, equity markets may be vulnerable. Stock prices in the U.S. appear to reflect the expectation that all of the areas of concern will be resolved favorably, so any disappointment could cause equity markets to fall. While it appears that economic growth both in the United States and abroad will continue to improve, it is less certain if stock markets can continue to climb in 2020. The result may be modestly positive returns and a lot of volatility in stock markets in 2020, with any prolonged sell-off being felt more acutely in U.S. stock markets.

During the first few days of 2020, tensions with Iran have reminded investors that investing in the stock market is not without risk. There have been numerous articles written about how to “trade” the market given these “new” risks, which provide specific investments that the authors believe will do well in the current environment.

The reality is that these risks were always present, but they are ignored when investors are feeling overly optimistic. At HBKS we always are thinking about these risks, and we construct our clients’ portfolios in a way that prepares them for a range of outcomes. A broadly diversified portfolio has exposure to many asset classes that may have little correlation to each other. Some will rise and some will fall in nearly all market environments. In the long run, we believe this approach will provide the highest probability of achieving a return that enables investors to meet their financial objectives.

During the past ten years, some have claimed that investors would be better off investing only in large-cap domestic stocks such as those in the S&P 500 Index. We published an earlier this year that disputes this theory, showing that a globally diversified portfolio provides for the highest probability of success in meeting investors’ goals. Recently Blackrock also published a report that supports our view. The graphic below illustrates that during most market environments investors who follow a broadly diversified approach often “feel” as if they are losing out by not being 100 percent invested in the S&P 500 Index. The report demonstrates that, over a long time horizon, a broadly diversified portfolio will generate similar returns as the S&P 500 Index with less volatility even though an investor may “feel” like they are losing much of the time. 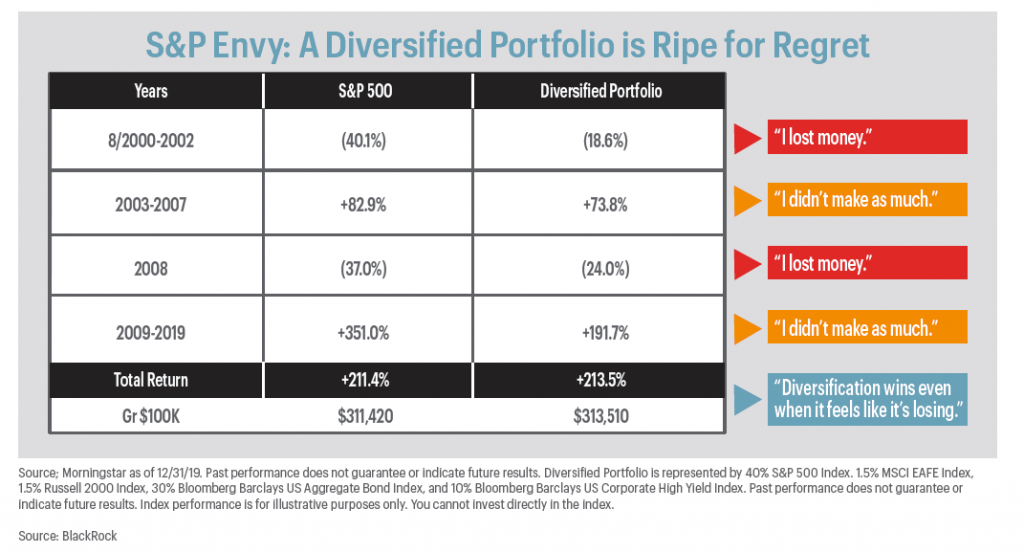 The moral is that investors will likely be better off if they maintain a broadly diversified portfolio and resist the temptation to guess which investment will be the “hot” investment in any given year. Sometimes, investors need to be reminded to keep calm and stay the course. 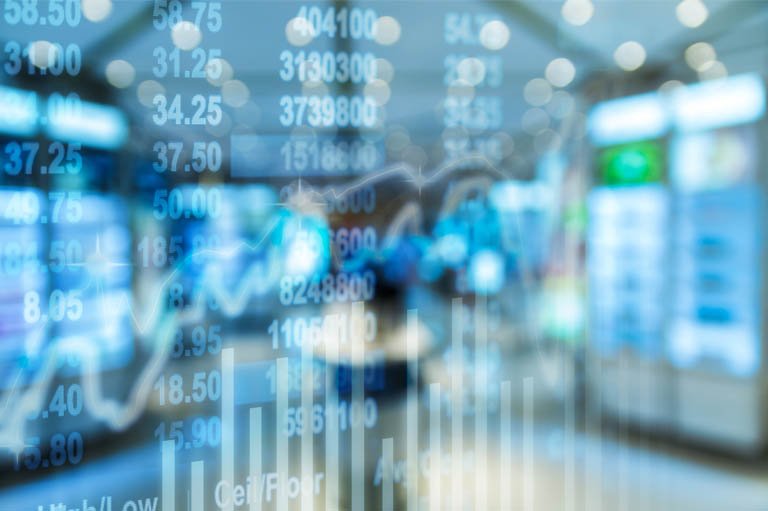