Fears of an Impending Recession Are Overblown

The most probable scenario for the next couple years is a slowdown in economic growth, not a recession.

Global stock markets surged higher in June, pushing the All-Country World Index (ACWI) up 16.2 percent for the first half of 2019. This performance occurred as global economic growth continued to expand at a moderate pace, but by the end of the second quarter cracks began to appear in the data. The global service sector has softened, trade growth is slowing, and global manufacturing is shrinking. The Purchasing Managers’ Index (PMI), which tracks the manufacturing sector, had been falling all year before stabilizing in June. Long term interest rates plunged, indicating markets are anticipating slower economic growth or possibly a recession. 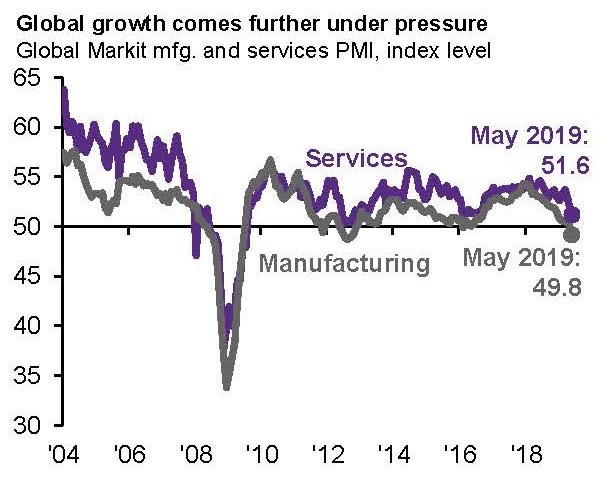 The U.S. economy has held up better than most. By the end of July, America’s economy will have been growing for 121 months, the longest U.S. expansion on record. However, even in the U.S. there are signs of slowing growth. Exports, rail freight, and single-family housing starts are all in decline.

With a China and U.S. trade war potentially exacerbating the weakness, could the unprecedented expansion be near an end? The Federal Reserve (Fed) seemed to imply as much when it lowered its outlook for growth at its March meeting. But more recent data releases have been stronger than expected, setting the stage for better economic growth in the second quarter than predicted. For example, retail sales were unexpectedly strong in June, and manufacturing output increased.

As well, the economic environment remains conducive to continued growth. Unemployment remains near record lows. Wage growth has picked up as has productivity, so inflation remains low. Corporate and personal debt has risen but is not exceptionally high. More importantly, interest rates are low, so payments on the debt remain manageable.

It is important to keep in mind that not all economic slowdowns lead to recessions. A slowdown in growth is more likely to turn into a recession when financial and economic imbalances are elevated—for example, a rapid growth in private-sector debt, which has preceded many recessions. Private-sector debt as a percentage of Gross Domestic Product (GDP) peaked during the financial crisis of 2008, and then dropped steadily for a number of years. Currently there are no signs of an elevated imbalance in the U.S. Debt has rebounded in the last five years, but has remained near historical averages as GDP has also grown.

Accelerating inflation is another economic imbalance that can lead to a recession. Excessive consumer spending brings on price increases and eventually a recession. Consumer spending has been solid but unspectacular throughout the economic expansion, and inflation has remained below the Federal Reserve’s targeted rate of two percent. The strong employment situation and the robust retail spending data in June provides comfort this trend will continue going forward.

Business investment has been particularly weak recently, another factor many economists consider a reason to be concerned about an impending recession. If trade tensions remain elevated, the lack of business spending will remain a cause of anxiety. However, corporate investment is only 18 percent of the U.S. economy, while consumer spending accounts for about 68 percent. As well, any improvement in the trade negotiations could provide a boost to corporate investment.

Finally, the Great Recession was brought on in part by financial imbalances caused by negligent mortgage lending and the proliferation of speculative investments in risky mortgage-backed securities. Currently, thanks to new regulations and the recency of the financial crisis, banks have healthy balance sheets, their mortgage credit quality is high, and the practice of bundling high-risk mortgage loans into securities has been curtailed.

With the historical catalysts for recession still absent, the most probable scenario over the next couple years is a slowdown in economic growth, not a recession. Still, some people believe the economic expansion must end soon simply because it has been going on for so long. But expansions don’t die of old age. In fact, over time the stretches of economic growth in America have gotten longer.

Source: The Economist, “For how long can today’s global economic expansion last?”, July 13, 2019

There has been much debate about why this has occurred. Most economists agree that technological improvements have enhanced inventory management, led to greater efficiency, and lowered the cyclical nature of many businesses. Also, the Fed has become more active in lowering interest rates and providing stimulus late in the business cycle in order to keep demand up. Chairman Jerome Powell confirmed this when he said the Fed will use every tool in the its toolbox in order to maintain economic growth, including the emergency measures that were taken at the start of the financial crisis. This all but confirmed the Fed will cut rates at least once, possibly twice this year.

Outside the U.S. global growth is sagging. But in many countries it is still higher than in the U.S. Even in countries where growth is near recession levels recent data indicates an improving economic environment. Manufacturing in many countries is beginning to recover after months of deteriorating. Interest rates are very low, especially in Europe, so there will likely be a boost in activity in the coming months due to the lagged effect of lower bond yields. In addition, any additional stimulus from China will provide a boost to global growth.

Still, there are many reasons for concern. Many American companies rely on global production chains being tested by the trade war. If tensions between the U.S. and China escalate, some companies could be forced to move manufacturing facilities out of China, which could disrupt production. Technology firms face the threat of increased governmental scrutiny and new regulations. With government debt ballooning to record levels, a rise in long-term interest rates could cause debt payments to increase, reducing the money available for stimulus spending.

Such factors against the backdrop of mixed economic signals could lead to greater volatility in stock prices going forward. Global stock valuations are rising, and while stocks are not excessively expensive, they are not extremely inexpensive either.

An allocation to foreign stocks should always be a part of a properly diversified portfolio, and foreign stocks appear poised to generate better returns than their U.S. counterparts. As a group, foreign stocks are set to trail large-cap U.S. stocks in 2019, meaning they would have underperformed in six of the last seven years. Currently U.S. large caps are more expensive than stocks in many foreign markets, yet overseas the expected growth rate is higher. The International Monetary Fund expects GDP growth in the U.S. to be 2.3 percent in 2020 versus 3.6 percent globally. Higher valuations and slower U.S. growth suggest future returns for U.S. stocks could be below average, while most market experts predict annual returns for U,S, large caps of between 5 and 6 percent over the next 10 years.

When U.S. stock returns are below 6 percent, international stock performance leads domestic stocks 94 percent of the time. Stock market leadership runs in cycles, and it is reasonable to believe the current cycle of U.S. leadership may be near an end. 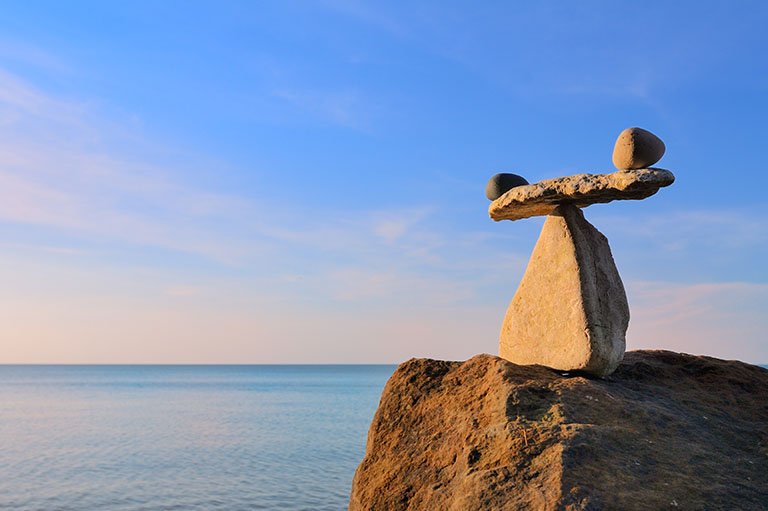