Stock Market Volatility Likely to Continue in 2019, but a Recession is Unlikely

2018 turned out to be a disappointing and very volatile year for investors despite a continuation of solid global economic growth. In the United States, the S&P 500 Index dropped nearly 20 percent from its all-time high reached on September 20, before rallying a bit the last few days of the year. For the full year the index was down 4.4 percent. Global stocks fared even worse, with the MSCI All Country World Ex-USA Index down 14.2 percent in 2018.

Equity markets recorded these declines despite economic data releases that mostly remained consistent with improving economic conditions, especially in the United States. The unemployment rate continued to trend lower and currently sits at 3.7 percent, its lowest level since December of 1969. That is unlikely to change given that initial jobless claims continue to post historically low numbers. Wages are finally rising and household net worth, according to the Federal Reserve, hit record highs in the third quarter of 2018. Interest rates remain low, and GDP in the United States likely grew at an estimated average annual rate of about 3.0 percent, which would be the fastest growth since 2005. The healthy economy helped to boost consumer confidence in the United Stated to 18-year highs.

The median U.S. GDP (Gross Domestic Product) forecast for 2019 hovers around 2.5 percent, slower than 2018 but still solid. The manufacturing and services sectors of the economy are still growing, and consumer confidence remains high, a positive indicator for solid GDP growth in 2019. Consumer spending accounts for about 70 percent of GDP.

With a healthy economy, why have stocks been plummeting?
As 2018 progressed, the data on the health of the economy increasingly began to come in below economist’ expectations. The Citi Economic Surprise Index, shown below, is a measure of whether economic releases have on balance been above or below consensus estimates during the given period. For the first half of the year the surprises were positive thanks to the stimulative effects of the tax cuts. By July the Economic Surprise index turned negative both in the U.S. and abroad, meaning the majority of data releases around the world were below economists’ estimates. 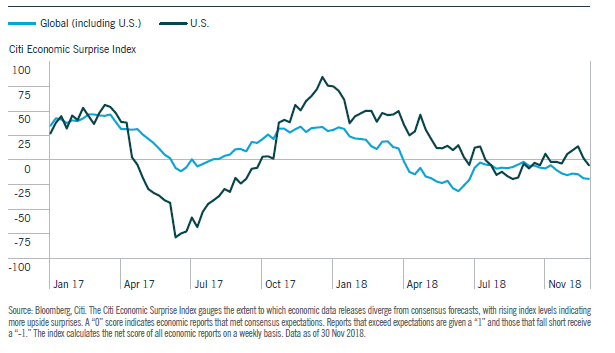 Important data on the strength of the economy such as existing home sales, durable goods orders, and retail sales all showed signs of weakening. The data was still mostly solid and not indicative of a contraction in economic activity, but the trend was indicative of a slowdown in growth. Additional worries regarding higher global tariffs, rising US interest rates, and the soaring US federal budget deficit caused many investors to believe that global growth would slow more than anticipated in 2019. All of these concerns were growing against the backdrop of elevated valuations in many stock markets.

Is a Recession on the Horizon?
Now, many are jumping to the conclusion that the large drop is stocks prices is an indication that a recession is likely in 2019. However, it is extremely difficult to predict when a recession may occur, and the stock market does not have a good track record when it comes to recessions. As economist Paul Samuelson quipped in 1966, “The stock market has predicted nine of the past five recessions”. That trend has remained consistent. Since 1945 a recession has only occurred half the time after a sharp stock market correction.

In addition, it typically takes multiple years for a recession to occur after corporate earnings peak. A Reuters study showed that since World War II, in the United States a recession has begun, on average, 49 months after the peak in the earnings growth of companies in the S&P 500 Index. The number of months has ranged from 7 to as many as 103, so if history is a guide we shouldn’t expect a recession until at least the latter stages of 2020, and probably later.

So both the correction in stocks and the peak in corporate earnings should not be seen as an indicator that a recession is near. Other economic data also seem to indicate a recession will not occur in the next few years. The Leading Economic Index (LEI) is a monthly publication that attempts to predict future movements in the economy based on a composite of 10 economic indicators whose changes tend to precede changes in the overall economy. The LEI continued to rise through its last reading in November of 2018, but its overall pace of improvement slowed towards the end of the year. This implies that growth in the U.S. economy may continue in 2019, although at a more moderate pace.

Just as people overestimated the strength of the economy toward the end of 2017, they may have turned too negative on 2019 according to the actual economic data. This may be true even without additional support from the U.S. government, but already the Federal Reserve has lowered its expectation of future rate hikes from 3 to 2 in 2019. Also, with the Democrats ready to assume control of the House of Representatives, the odds of the passage of a compromise infrastructure spending bill is rising, which would provide additional stimulus.

So what does that mean for stock markets in 2019?
After the recent stock market decline, it appears that stocks are no longer trading at excessive valuations. In fact, stocks may even be seen as being at fairly attractive valuations as the slowdown in the corporate earnings growth appears to be reflected in stock prices.

At the end of December, the SP 500 was priced at 14.6 times expected 2019 earnings, below its 25-year average of 16.1 times. So stocks would need to appreciate about 10 percent just to reach historical average valuations. At December 31st levels, corporate earnings growth would actually need to drop 2.7 percent for the valuation to be at its historical average.

Many troubling issues need to be resolved
Still, there are real and troubling issues that need to be resolved before buyers move aggressively back into stocks. The tariff negotiations between the Trump Administration and China present the biggest risk – and potential opportunity – for equity markets. The trade war has taken a toll on growth, with manufacturing activity taking a turn for the worse in both countries. In December the purchasing managers’ index, which tracks manufacturing activity, contracted in China for the first time in two years, and sank to a 15 month low in the United States. A deal between the world’s two largest economies would go a long way toward stabilizing the global economy.

Another large factor driving the current market sell-off is the belief among some investors that the Federal Reserve will be too aggressive in removing the supportive monetary policy it has been following over the last decade. In December Federal Reserve Chairman Powell announced the Fed’s fourth rate hike this year. He also announced that the Fed will continue to withdraw liquidity from the monetary system gradually by reducing its balance sheet in 2019 at the same rate it was being reduced in 2018. Many thought Powell’s comments implied the Fed’s monetary policy may become too restrictive in 2019. This fear has already had a negative effect on the U.S. economy, particularly in the interest-rate sensitive housing and automobile industries.

Outside the United States, the outlook is even more unclear. Recently the European Central Bank (ECB) cut its economic growth forecasts, and ECB President Mario Draghi said “It’s a climate of great uncertainty.” Growth in Germany and Italy has slowed, putting those countries on the verge of a recession. The possibility of the United Kingdom leaving the European Union without a formal agreement makes the outlook for the entire European Union hazy. How this issue gets settled will go a long way to determine if the current economic slowdown in Europe worsens or improves.

The Chinese economy is slowing, which hurts the growth in many emerging economies that are already struggling due to an outflow of money caused by the strength of the U.S. dollar. These economies could either rise or fall based on whether or not the tariff issues are resolved between the United States and China. As a result, although the long term expected returns are higher than equities in most developed markets, there also is heightened risk in owning Emerging Market equities at this point.

It might take years for all of these concerns to be resolved. Meanwhile, the geopolitical risks regarding North Korea, China, Russia and the Middle East will continue to pose additional sources of investor anxiety.

Summary
There are many reasons for investors to be concerned about global growth in 2019. The economic data will continue to be scrutinized for signs that the negative headlines are causing consumers to cut back on spending or corporations to stop pursuing growth strategies. Some of the signs which might be an early indication of an oncoming recession are rising initial jobless claims, falling new orders by manufacturers, and lower new housing building permits. Currently, these leading indicators of economic activity are not pointing toward a recession in 2019.

As for global equities, there are still many positives that could allow for a rebound in prices in 2019. Corporate profits are likely to moderate but continue to be solid, benefiting from a lower tax rate on corporate profits and less regulation. Unemployment remains low, interest rates remain near historical lows, and consumers are in good financial shape and spending confidently.

There also is the possibility that there will be a positive surprise that would act as a catalyst for growth and stabilize the stock market. Some people have noted that one reason a large stock market decline only precedes a recession half the time may be because the federal government acts to provide stimulus in order to boost growth. If the United States and China reach some sort of compromise that would prevent the trade war from escalating, global growth fears may be calmed. Also, if the Federal Reserve decides to stop raising rates, or stops reducing its balance sheet, equity markets would likely react favorably.

With the competing forces of solid but slowing economic growth during a period of rising rates, trade wars, and a lot of global uncertainty, about the only thing that can be stated with any confidence is that the global equity markets are likely to remain highly volatile throughout 2019. In this environment, investors would be wise to adhere to the tenets of maintaining a broadly diversified, global asset allocation, and take advantage of the volatility by rebalancing to their targeted allocation when there is a large movement in prices. 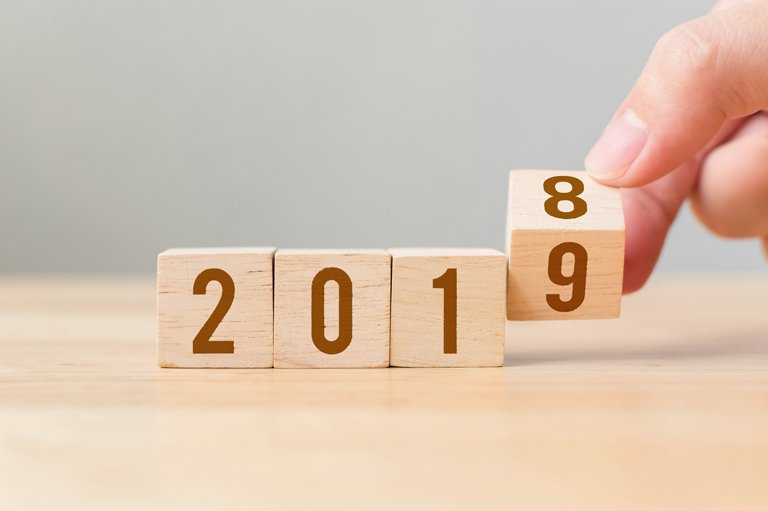